There is the normal 2×2 method of predicting future scenario trends, where the futurist or model maker produces four distinctive different scenarios emphasizing a range of possibilities. I use a variant on that, which I would label the K model or K rozette. I take some inspiration from the de Bono thinking hats clearly (sighs wearily at House), and probably a bit from the Hegelian analysis using thesis, antithesis and synthesis.

I am sure fear someone out there is already using this and I am reinventing gunpowder here, but I haven’t run across it. 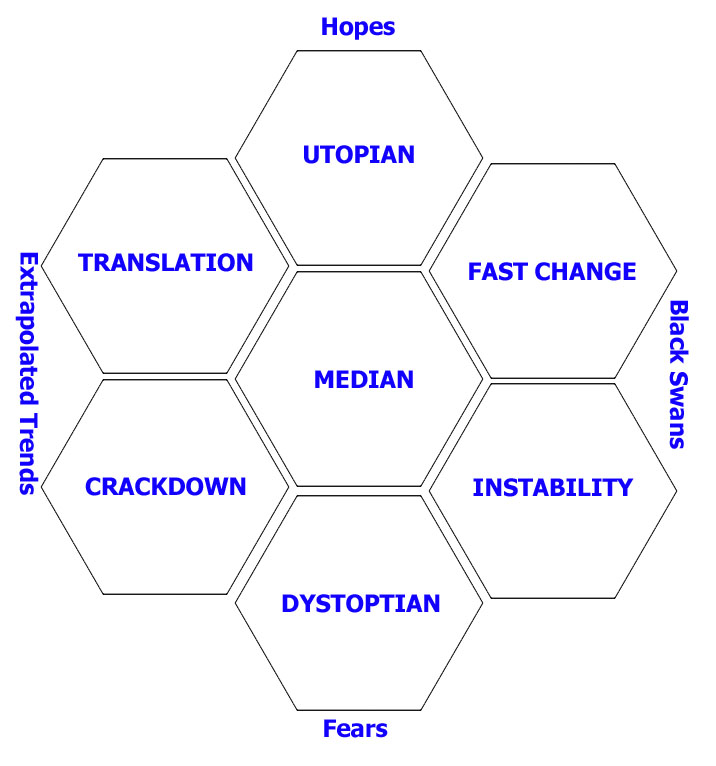 When making this model, the first questions I ask are –

From this I compose the rozette of ‘arguable’ outcomes. Of course as in all future trend analysis I have no way of knowing whether or not I am right until I get there.

The hexagonals should contain the following;

For instance, I can argue that we must take action against asteroid impacts. However making a fair assessment I lay all impacts of miles long ‘bruce willis’ asteroids outside my main hexagonal model, because the probability of these impacts is exceedingly low.

(1) the top most hexagonal contains a future that is positive and upbeat., It contains “fair expectations” and “reasonable outcomes”. Important is that I mix realism and optimism with irony. I emphasize that “things may turn out pretty nice” and then add a joke that “society had the sense to institutionalized Sarah Palin”, emphasizing one or casual several key prerequisites for such outcomes. This makes the positive more credible to my audience. This makes me and the scenario ranges more plausible to be taken seriously.

(2) the lowest scenario hexagonal I’d label the Orlov hex. This hex is about emphasizing the worst trends, and generally the range of stupidity in human policies. Nature is invariable and we can’t argue with nature – what makes the difference between things being “fairly manageable” and “goddamn awful” is quite often the stupidity of humans. Emphasizing this will resonate well with my audience, and it will prompt anyone to look critically at similar scenario ranges in this own personal context.

(3) The top left hexagonal emphasizes ‘fairly ambigious” outcomes based on extrapolation of current trends. This is done wonderfully in the role playing game “transhuman space” and the range of scenarios emphasize continuation of current power structures, current established growth rates and current divisions in society – however it pays to extrapolate “a little” towards the surreal and make clear that out current world or context is precarious and arbitrary.

(4) The top right hexagonal emphasized radical and disruptive change, but without making value judgements about whether or not these are good or bad. The emphasis is about gross ambiguity, and future outcomes that are odd, “yet somehow make perfect sense”. These would be analysis based on Kurzweilian prognosis, tempered with a good dose of Goertzel, Yudwosky, Anissimov or Leitl. A good example would be predicting the bizarre destabilizing outcomes we may have when things ‘completely spin out of control’, as with nanotechnology, life extension, organ printing, robotics. The audience won’t buy many of these outcomes, but will accept them if juxtaposed against other outcomes. It makes sense to designate a few examples of outcomes ‘which may lie outside’ the seven hex model (fairly unlikely ones) and emphasize why a few ‘bizarre’ predictions I choose lie inside this hex. For instance – a grey goo scenario ‘is not thermodynamically plausible before 2050’, but ‘garage hackers producing a massive ecology of home grown vandalism or hacking nanoids before 2050 is very likely’. That sort of thing. Try and come up with at least ten “unknown unknowns” most of the the audience wouldn’t have thought of – the “oh rights“.

(5) the top left hex emphasized the range of futures where society (and human choice) constrains outcomes out of sheer necessity. There are three categories of outcomes to emphasize (a) outcomes where we can all agree about society is validated in surpressing, i.e. the proliferation of nuclear weapons; (b) the range of outcomes or trends where there is great uncertainty about what is sensible, i.e. should “should we create more debt or should we enact austerity?”, that sort of minor ambiguity and (c) the range of future scenarios where we see have major and heated dismissal when society cracks down – i.e. does it make sense to continue “the war on drugs”. A major recurrent question here is the futures we will get when state repression creates black markets.

(6) The top right hex should be strongly contrasting with hex (4), and it emphasizes black swans tearing down society while emphasizing humanity will persevere. This is the “snow crash” range of outcomes that should make the audience in stark disagreement whether or not these are dystopian or utopian in nature. Hexagonal 6 emphasized robustness, “resilience”, selection and casually mentions how many people sadly died in this spectrum of the outcome. It emphasizes what people should do if things go bump in the night. Scenario six is always rich with references to the ‘titanic’ and other ‘interesting disasters’. This hex must be presented with the same detached analysis as a Dyson discussion Dresden firebombing, or it should discuss the “opportunities nature had when the region around Chernobyl was left depopulated”. Silver linings.

(7) The last hexagonal, the one at the center should not be a mishmash hexagonal watered down mixture of all previous ones. This is pretty damn challenging. I tend to take all the predominant and “exaggerated” aspects I came up with in one to seven and ‘outrageously contradict” them in seven. In other words, I take it with a grain of salt, but I do so ambitiously. If I were to do an analysis emphasizing the development of virtual realities between 2020 and 2025 and ranges 1 to 6 came up with extravagance and shock and awe, I would make (7) viciously disagree and stubbornly with all of the above. That can be tricky but it is doable. If you can’t figure it out talk with some sceptics and let these people dismantle 1 to 6, and generate an entertaining composite from what the sceptics have to say and call that seven. Or -if you can- create several (2, 3) variants for hex seven.

he downside of the 7 method analysis it is lengthier than the 2by2. People get bored more easily when matrixing this in their heads – that means – funnier slide shows. I’d seriously not use powerpoint for this method. You lose people with slide 12.