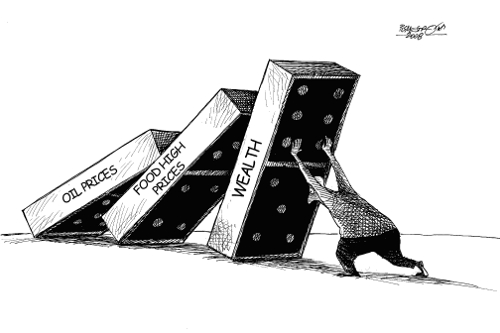 If every vehicle in the United States were powered by ethanol, only one of eight would be driveable. Replacing just one-eighth of U.S. gasoline consumption would require the country’s entire corn crop.

Corn-based ethanol’s contribution to fighting global warming is marginal at best. A debate is raging, in fact, over whether ethanol takes more energy to produce than it provides. Ethanol burns cleaner than gasoline, but its production relies heavily on diesel-chugging tractors and petroleum-derived fertilizers, to the tune of some 140 gallons of oil per acre. Distilling corn into ethanol is also energy intensive, and while some forward-thinking producers are processing it with methane, biomass, and other alternative fuels, most of the 190 ethanol plants now in the works will be powered by coal. A recent survey by the University of California at Berkeley found that corn-based ethanol cuts greenhouse-gas emissions by, at best, 13 percent over gasoline.