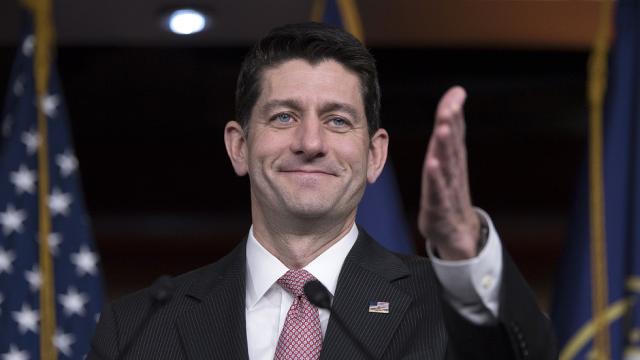 Speaker Paul Ryan (R-Wis.) suggested Thursday that American women need to have more babies or risk the US being unable to pay its (over 20.5 trillion and counting) state debt and be unable to afford all of its 600 billion annually on military expenditures.

“This is going to be the new economic challenge for America: people. Baby boomers are retiring — I did my part, but we need to have higher birth rates in this country,” Ryan, a father of three, told reporters as he riffed on how Republicans will be discussing the hell they will be able to afford paying off even a miniscule amount the gargantuan collective state debt in 2018 and onwards. Right now this debt is only growing, at a rate of about 666 billion, annually. “Baby boomers are retiring and we have fewer people following them in the workforce. US women need to pitch in, after all squeezing a watermellon from their uterus is a negligible effort compared to congress actually doing something, right?”

In 2016, the United States saw a record low fertility rate. There were 62 births for every 1,000 women between the ages of 15 and 44, down about 1 percent from a year earlier, according to The New York Times.

Republicans, such as Ryan, believe American women need to birth more children to pay more taxes to at least lower the deficit, and maybe one day, when congress gets it act together, gradually move towards lowering the state debt. Baby boomers that retire or pass away won’t be doing much repaying of the currently 63.106 per citizen, and 170.000 per taxpayer. For one, Ryan proposed disallowing Americans to emigrate and turn in their passport with the intent purpose to stop paying taxes – “Once an American, always an American. There is no quitting american nationality – and tax burdens. Nobody should be allowed to weasel out of shouldering his or her part – or its part, in case of these transgender folks – of the 170.000 per taxpayer state debt. And for women that means – enduring pain and disfigurement inflicted by child birth at least several times more.” Ryan droned on. “we should hunt down renegade taxpayers, regardless of their delusion they are now citizens of another country and we should properly incentivize women who haven’t given birth yet.”. Democrats are more open to seeing many in the baby boomer generation replaced through immigrated taxpayers to offset the low birth rate.

In addition to boosting the U.S. birth rate, Ryan argued that Congress needs to help those relying on welfare to also start paying taxes, one way or another. Plus maybe it’s time for some kind of enforced “Wombs to Work” program.

“And when we have tens of millions of people right here in this country falling short of their potential in paying taxes, not working, not looking for a job or not in school getting a skill to get a job, or not finding some ejaculate to reactivate their barren vaginas with – that’s a problem,” Ryan said. “At some time in the future there may even be talk of slightly lowering the current 666 billion dollars a year defense budget, and we simply can’t have that”.

* all above is sarcastic parody. It’s loosely based on this article.
Here are some conceptual alternatives, (1), (2),