I visited Minneapolis early last february 2010. I witnessed a wonder. Seriously. The inner city of Minneapolis is all these huge buildings connected by something we don’t know in Europe – skyways. I was stunned and impressed. What was more impressive was the contrast between the outside temperature (including a meter of snow) and inside these tubes. Outside it was like this: …

while inside the enclosed glass walkways I was dressed in a T shirt.

I was with a friend, Rachel, and Rachel being a somewhat heavy smoker she had to literally step out in -15 Celsius and have a puff. I shot this picture of her. 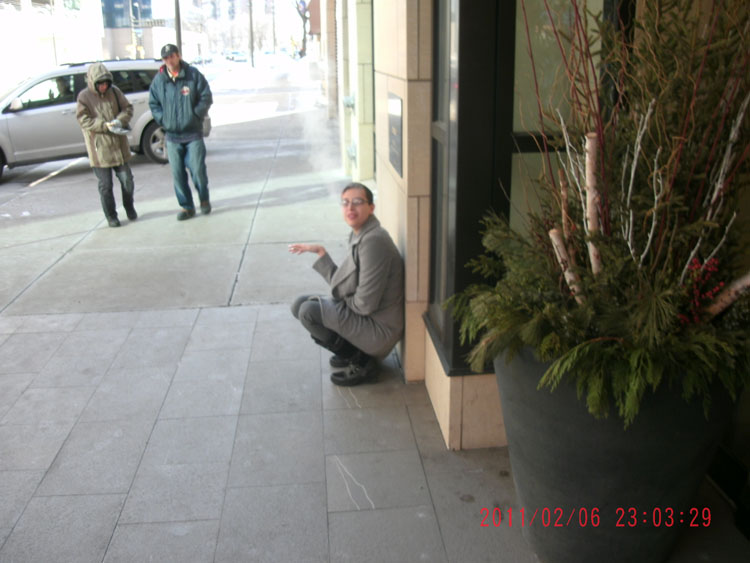 I am extremely grateful for witnessing this bit of iconic America. What struck me is how affluent the US is, as a collective. While most underclass americans are acutely miserable, the state is gluttonously rich, and takes it for granted. Believe me, Minnesotans are very nice people, far nicer than many other species of Americans. Rachel and myself visited a nightclub and inside it was gothic and fun. One step outward (again, to have Rachel smoke) and I stood between a meter and a half of snow in this inner court yard talking to people about the weather.

The painful reality is that this bit of Americana is unsustainable. It will be gone in a few years, mostly deserted. The economy will slide, oil prices will double or more, and many Minnesotans will be forced to move south. It will be an acutely painful transition in to a lifestyle with a fraction of the cars and mobility, far more centralized and spartan living conditions, a mad scramble towards renewable sources of energy, isolation and forced migrations. The city will stand empty six months a year and slowly the migrant workers will trickle away in autumn.

But in essence, Minneapolis was a demonstration of the US as it still is and how it will not much longer be. I was there and I witnessed it. I am very grateful I could, in considerable luxury I might add.