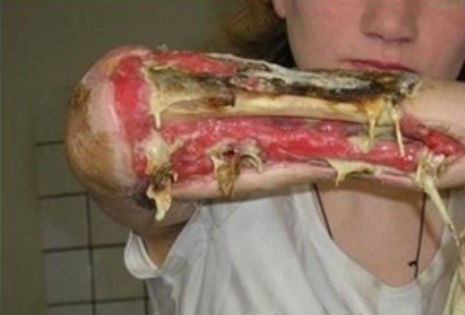 Oleg glances furtively around him and, confident that nobody is watching, slips inside the entrance to a decaying Soviet-era block of flats, where Sasha is waiting for him. Ensconced in the dingy kitchen of one of the apartments, they empty the contents of a blue carrier bag that Oleg has brought with him – painkillers, iodine, lighter fluid, industrial cleaning oil, and an array of vials, syringes, and cooking implements.

Half an hour later, after much boiling, distilling, mixing and shaking, what remains is a caramel-coloured gunge held in the end of a syringe, and the acrid smell of burnt iodine in the air. Sasha fixes a dirty needle to the syringe and looks for a vein in his bruised forearm. After some time, he finds a suitable place, and hands the syringe to Oleg, telling him to inject the fluid. He closes his eyes, and takes the hit.

Russia has more heroin users than any other country in the world – up to two million, according to unofficial estimates. For most, their lot is a life of crime, stints in prison, probable contraction of HIV and hepatitis C, and an early death. As efforts to stem the flow of Afghan heroin into Russia bring some limited success, and the street price of the drug goes up, for those addicts who can’t afford their next hit, an even more terrifying spectre has raised its head.

The home-made drug that Oleg and Sasha inject is known as krokodil, or “crocodile“. It is desomorphine, a synthetic opiate many times more powerful than heroin that is created from a complex chain of mixing and chemical reactions, which the addicts perform from memory several times a day. While heroin costs from £20 to £60 per dose, desomorphine can be “cooked” from codeine-based headache pills that cost £2 per pack, and other household ingredients available cheaply from the markets.

It is a drug for the poor, and its effects are horrific. It was given its reptilian name because its poisonous ingredients quickly turn the skin scaly. Worse follows. Oleg and Sasha have not been using for long, but Oleg has rotting sores on the back of his neck.

“If you miss the vein, that’s an abscess straight away,” says Sasha. Essentially, they are injecting poison directly into their flesh. One of their friends, in a neighbouring apartment block, is further down the line.

“She won’t go to hospital, she just keeps injecting. Her flesh is falling off and she can hardly move anymore,” says Sasha. Photographs of late-stage krokodil addicts are disturbing in the extreme. Flesh goes grey and peels away to leave bones exposed. People literally rot to death.

Russian heroin addicts first discovered how to make krokodil around four years ago, and there has been a steady rise in consumption, with a sudden peak in recent months. “Over the past five years, sales of codeine-based tablets have grown by dozens of times,” says Viktor Ivanov, the head of Russia’s Drug Control Agency. “It’s pretty obvious that it’s not because everyone has suddenly developed headaches.”

Heroin addiction kills 30,000 people per year in Russia – a third of global deaths from the drug – but now there is the added problem of krokodil. Mr Ivanov recalled a recent visit to a drug-treatment centre in Western Siberia. “They told me that two years ago almost all their drug users used heroin,” said the drugs tsar. “Now, more than half of them are on desomorphine.”

He estimates that overall, around 5 per cent of Russian drug users are on krokodil and other home-made drugs, which works out at about 100,000 people. It’s a huge, hidden epidemic – worse in the really isolated parts of Russia where supplies of heroin are patchy – but palpable even in cities such as Tver.

It has a population of half a million, and is a couple of hours by train from Moscow, en route to St Petersburg. Its city centre, sat on the River Volga, is lined with pretty, Tsarist-era buildings, but the suburbs are miserable. People sit on cracked wooden benches in a weed-infested “park”, gulping cans of Jaguar, an alcoholic energy drink. In the background, there are rows of crumbling apartment blocks. The shops and restaurants of Moscow are a world away; for a treat, people take the bus to the McDonald’s by the train station.

In the city’s main drug treatment centre, Artyom Yegorov talks of the devastation that krokodil is causing. “Desomorphine causes the strongest levels of addiction, and is the hardest to cure,” says the young doctor, sitting in a treatment room in the scruffy clinic, below a picture of Hugh Laurie as Dr House.

“With heroin withdrawal, the main symptoms last for five to 10 days. After that there is still a big danger of relapse but the physical pain will be gone. With krokodil, the pain can last up to a month, and it’s unbearable. They have to be injected with extremely strong tranquilisers just to keep them from passing out from the pain.”

Dr Yegorov says krokodil users are instantly identifiable because of their smell. “It’s that smell of iodine that infuses all their clothes,” he says. “There’s no way to wash it out, all you can do is burn the clothes. Any flat that has been used as a krokodil cooking house is best forgotten about as a place to live. You’ll never get that smell out of the flat.”

Addicts in Tver say they never have any problems buying the key ingredient for krokodil – codeine pills, which are sold without prescription. “Once I was trying to buy four packs, and the woman told me they could only sell two to any one person,” recalls one, with a laugh. “So I bought two packs, then came back five minutes later and bought another two. Other than that, they never refuse to sell it to us, even though they know what we’re going to do with it.” The solution, to many, is obvious: ban the sale of codeine tablets, or at least make them prescription-only. But despite the authorities being aware of the problem for well over a year, nothing has been done.

President Dmitry Medvedev has called for websites which explain how to make krokodil to be closed down, but he has not ordered the banning of the pills. Last month, a spokesman for the ministry of health said that there were plans to make codeine-based tablets available only on prescription, but that it was impossible to introduce the measure quickly. Opponents claim lobbying by pharmaceutical companies has caused the inaction.

“A year ago we said that we need to introduce prescriptions,” says Mr Ivanov. “These tablets don’t cost much but the profit margins are high. Some pharmacies make up to 25 per cent of their profits from the sale of these tablets. It’s not in the interests of pharmaceutical companies or pharmacies themselves to stop this, so the government needs to use its power to regulate their sale.”

In addition to krokodil, there are reports of drug users injecting other artificial mixes, and the latest street drug is tropicamide. Used as eye drops by ophthalmologists to dilate the pupils during eye examinations, Dr Yegorov says patients have no trouble getting hold of capsules of it for about £2 per vial. Injected, the drug has severe psychiatric effects and brings on suicidal feelings.

“Addicts are being sold drugs by normal Russian women working in pharmacies, who know exactly what they’ll be used for,” said Yevgeny Roizman, an anti-drugs activist who was one of the first to talk publicly about the krokodil issue earlier this year. “Selling them to boys the same age as their own sons. Russians are killing Russians.”

Zhenya, quietly spoken and wearing dark glasses, agrees to tell his story while I sit in the back of his car in a lay-by on the outskirts of Tver. He managed to kick the habit, after spending weeks at a detox clinic ,experiencing horrendous withdrawal symptoms that included seizures, a 40-degree temperature and vomiting. He lost 14 teeth after his gums rotted away, and contracted hepatitis C.

But his fate is essentially a miraculous escape – after all, he’s still alive. Zhenya is from a small town outside Tver, and was a heroin addict for a decade before he moved onto krokodil a year ago. Of the ten friends he started injecting heroin with a decade ago, seven are dead.

Unlike heroin, where the hit can last for several hours, a krokodil high only lasts between 90 minutes and two hours, says Zhenya. Given that the “cooking” process takes at least half an hour, being a krokodil addict is basically a full-time job.

“I remember one day, we cooked for three days straight,” says one of Zhenya’s friends. “You don’t sleep much when you’re on krokodil, as you need to wake up every couple of hours for another hit. At the time we were cooking it at our place, and loads of people came round and pitched in. For three days we just kept on making it. By the end, we all staggered out yellow, exhausted and stinking of iodine.”

In Tver, most krokodil users inject the drug only when they run out of money for heroin. As soon as they earn or steal enough, they go back to heroin. In other more isolated regions of Russia, where heroin is more expensive and people are poorer, the problem is worse. People become full-time krokodil addicts, giving them a life expectancy of less than a year.

Zhenya says every single addict he knows in his town has moved from heroin to krokodil, because it’s cheaper and easier to get hold of. “You can feel how disgusting it is when you’re doing it,” he recalls. “You’re dreaming of heroin, of something that feels clean and not like poison. But you can’t afford it, so you keep doing the krokodil. Until you die.”

Red: a few weeks ago I expressed the sentiment that the world we live in feels threatening and offensive to me the point it makes me feel acutely nauseous. I twittered this and mentioned it on youtube. Some people responded to me by stating “I should shut the fuck up and commit suicide“. When I indicated that such a response was emotionally stunted and disgusting, the commentators shared weith me “nobody wants to hear me express such feelings, and I should go find a therapist“.

My therapist is a gun cocked at the head of this kind of people. Make me shut up, bastards. I dare you.

Let me insist – we live in a world where people prefer avoid the pain of living and rather have the flesh rot from their exposed bones on their limbs. This is an extreme form of nihilism, and this is in effect an unacceptable world. I insist all people need to express being offended about this. This is not acceptable and should never be acceptable. People must let other people know all this can not be acceptable. I demand a better world where – literally – people are not left to literally rot. If we do not we will and should get whatever we deserve. People that subscribe top this level of nihilistic death wish will, if given the means to do so, cause horrific and nightmarish pain to the rest of humanity. And, to put it bluntly, who am I to blame them when they do? And trust me, within a few years, with emerging technologies such as nano-replication, garage biogenetics, new explosives, new weapons, RC robotics, redundant military equipment, hacking tools, new toxins, stray radiological substances – they can.