The liberation of people through technology, and the liberation of technology from the oppressive forces that want to control it, is part of the pirate DNA. This will be reflected at some point in actual policies of the Pirate Party, the party of the future.

The German Pirate Party has achieved spectacular results in the recent regional elections in Berlin, with 9% of the popular vote and 15 of 130 seats in Parliament. The first Pirate Party was founded in Sweden in 2006, with a platform based on Internet freedom. Today, the Pirate Party has a global presence with many national parties and local citizen movements, and a wider political platform.

From a summary published by newser:

Pirates believe in direct democracy, transparency in government, online data protection, the legalization of soft drugs, and the implementation of a basic minimum income for all. “We want more freedom,” said a candidate simply. The Pirates have won the support of many because they’re fresh, authentic and funny.

Pirates “don’t see borders,” and national parties are local instances of a global movement with common philosophy and objectives. The Pirate Parties International (PPI), the political international of the Pirate Party movement, was formally founded in 2010. That political parties must be national is in the rules of current politics, and most national Pirate Parties have not yet formulated detailed positions on important global issues, such as financial policy, foreign policy and defense. But it is easy to see that the pirate spirit wants to see the current geopolitical system, based on obsolete borders, abandoned and replaced by something better.

The Pirate Party was born as a single-issue party focused on Internet freedom, as a response to the crackdown by the Swedish authorities of the popular torrent site The Pirate Bay. But since 2006, pirates have formulated more general political positions inspired by internationalism, personal freedom in a fair society (social libertarianism), and moving over traditional right-left differences. Where else could basic income (BIG), personal freedom, Internet as a right, drug liberalization, and a lean and agile administration be found as points of the same political program?

From a story posted by Public Radio International:

A pirate party campaign ad sounds fairly calm and cool, but it is more than a bit shocking. It shows a cop smoking a joint—- after marijuana is legalized, of course. And there are two dads holding hands in a park, pushing a stroller. . .
Pirates are also big on transparency and plan to tell all when they get into the government. “We will leak everything that happens there,” said an elected Pirate politician. “We will show everything that happens in politics. No more closed doors. We will make politics for the people and not over the people.”

As Weisband explains in the Pellissier interview, Pirates are not simply “against copyright” but they “try to join the goals of freedom of intellectual property on one hand and the creator’s reward on the other hand.”

This makes a lot of sense: creators must be able to make a living with their creations, otherwise they will be forced to stop creating and do other things for a living instead. But the current system where creators get 5% or less, and the rest of the money goes to dinosaur publishing monopolies, must go. A system like vodo.net, where consumers pay a reasonable fee (or make whatever donation they can afford) directly to creators is the best for everyone (but the dinosaur publishers).

More than 20 years after the first web page, we are starting to see the disruptive impact of the Internet all around us. Perhaps the powers (big corporations, big banks, and big governments) originally let the Internet happen hoping to use it as a cheaper means to bombard us with their useless spam and scams, but now, after Wikileaks, Anonymous and the Arab Spring, they are scared because we-the-people are starting to use it against them. They want to regain control of the Internet, and we must not let them. Please read again John Perry Barlow’s A Declaration of the Independence of Cyberspace.

Barlow’s netizens, cypherpunks, and other free spirits have created organizations such as the Electronic Frontier Foundation to protect the Internet from predatory powers, but they have not been represented in politics. Until now. The Pirate Parties are the political representatives (at this moment, each in its obsolete nation state) of the global citizens of cyberspace.

Pirate Parties are the only political parties openly against government and corporate interference with the free Internet, and we must support the Pirate Party to keep the Internet free. Internet freedom is an important issue for technoprogressives and transhumanists. As a global, distributed community of persons who mainly communicate with each other online, we are children of the Internet. The Pirate Party is the party of the Internet, determined to keep it open, free and available to everyone.

The traditional political discourse is frozen in obsolete political categories such as ‘Right’ and ‘Left’. The Right says that corporations are good and governments are bad. The Left says that governments are good and corporations are bad. Only a few independent thinkers see the obvious, that big governments, big corporations, and big banks act together in perfect unison to keep all the power and all the money for themselves. Some transhumanists used to call themselves ‘Upwingers’, above and beyond Right and Left, but the term has not been widely adopted and Upwingers have never formulated a complete and coherent approach to politics in today’s world.

We are Upwingers who wish to move above and beyond Right and Left, and overcome both the savage social Darwinism of the Right and the nanny-state dictatorship of the Left. We are against the current power monopoly of big governments, big corporations, and big banks, and wish to see power back in the hand of the citizens where it belongs. Unfortunately these governments, corporations and banks, acting together, have transformed the global financial system into a huge Ponzi scam.

The victims of the modern Ponzis are the 99% of citizens. After having been scammed a first time, they have been scammed again with bailouts meant to take what little they had left and give it to the Ponzis. The time has come to say “enough.” It is a very hopeful sign that more and more members of this 99% majority are now occupying Wall Street and other financial centers. This has been called “American Spring,” and is becoming a planetary spring.

I said in a comment on the IEET blog: “I have no issue with those who do something useful, produce value, and make 100 times more money than me. I have many issues with those who produce nothing, destroy value, make others homeless and poor, scam the entire world, and make 10000 times more money than me. Those must go, along with the insane system that makes their scams possible.” (Thanks to Mike Treder for posting these words to Facebook and Twitter.) 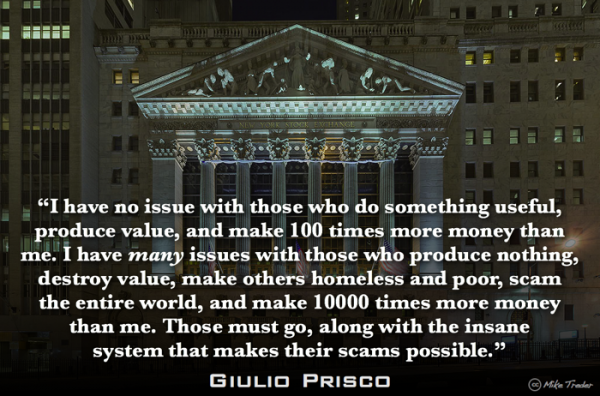 The wealth destroyed by officially sanctioned financial scams would have been sufficient to give a basic income to all citizens. If we get rid of these scams, we will be able to introduce BIG (Basic Income Guarantee) and radical changes.

The Occupy Wall Street movement has been criticized for not having a complete and coherent proposal to replace the current ponzonomy, which is probably true at this moment. But I am sure the Pirate Parties, which support Wall Street protesters, will gradually develop one. All the keywords and all bullet points are there, we just need to add some text.

Most technoprogressives and transhumanists adamantly support the civil rights of everyone independent of ethnicity, religious belief, sexual orientation, and the expectations of the bigot “moral majority.” In general, we do not consider current biological accidents (like having a body of the wrong gender) as sacred limits, but rather as shortcomings that can and should be corrected by technology. We support and admire those transsexuals who don’t let biological accidents stand in the way of their right to pursue happiness, and we support the right to make use of recreational drugs freely, without harming others. These points are either already present in, or fully compatible with, the political programs of Pirate Parties.

Technoprogressives follow current developments in science and technology, and we see that someday, perhaps soon, we will be able to change the traditional human condition in novel and very radical ways. The next generations of technologies for human enhancement will permit overcoming unwanted biological accidents such as wrong gender, disability, undesired physical or cognitive shortcomings, perhaps even aging and death.

As it happened in information technologies, established research labs are leading the initial development phases, but open source citizen collectives of infohackers, biohackers, neurohackers, and nanohackers may gradually take the lead, in the open or underground. The latter may be the case, since the powers will try to control the development of human enhancement technologies, and the result can only be pushing development underground.

Make no mistake: hackers are much smarter than 9-to-5 workers, and they work much harder because they do what they like and like what they do. This will be a very unwelcome development for big governments, big corporations, and big banks, which, by their very nature, wish to control us-the-sheeple and keep us in chains. When these issue will be in the political arena they will fight back, and a very dirty fight it will be. We need a presence in mainstream politics to be prepared.

Of course it would be unrealistic and unreasonable to expect that Pirate Parties take positions today on issues that may not enter the political arena before the next decade. But the Technoliberation of Muteba Kazadi, described by Greg Egan in his novel Distress—the liberation of people through technology and the liberation of technology from the oppressive forces that want to control it—is in the pirate DNA and someday will be clearly and forcefully reflected in actual policies of the Pirate Party, the party of the future.

I believe technoprogressives and transhumanists should join the pirate movement and their local Pirate Parties to contribute to the formulation of current policies and start planting the seeds of future technoprogressive political action. Please join the Space Piratez working group on Facebook.