Each month when the labor department figures are released in the US I also check this table for the Labor Force Participation figure. This month there is great news for the re-election of Obama that the jobless claims are sharply down. Unfortunately, since jobless claims are just the percent of people seeking new unemployment benefits, and the unemployment rate goes down when people get discouraged and drop out of the labor force, the labor force participation rate is the more important barometer, and it is still tracking down…

In order for this figure to go back up we would have to be adding three times the number of jobs that we currently are. And as “business confidence” picks back up they still have to choose between capital investments that improve productivity (IT and automation) and hiring more workers. Given the extraordinarily unsustainable health care costs borne by employers in the US it is now surprise that the majority prefer hire a robot…

The article:
In no other U.S. recovery since World War II have companies been simultaneously faster to boost spending on machines and software, while slower to add people to run them.

Part of this is the old story of substituting capital for labor. But a combination of temporary tax breaks that allowed companies in 2011 to write off 100% of investments in the first year and historically low short- and long-term interest rates have pushed that process into overdrive.

Hiring, meanwhile, is too slow to bring the unemployment rate down rapidly. Employers have added workers at a monthly rate of 142,000 for the past six months, half the pace needed to significantly reduce unemployment, which is now at 8.5%.

Sunny Delight is spending $70 million to upgrade equipment at its five U.S. juice factories, much of it in Littleton, Mass., above.

Billy Cyr, chief executive of Sunny Delight Beverage Co., a Cincinnati-based beverage company, says he is buying new machinery partly because it is a bargain. “When the cost of capital goes up, it is harder to justify an equipment purchase and may, instead, result in higher employment using existing equipment,” he says, such as by adding shifts or overtime for existing workers. Today, the opposite is happening.

Instead of hiring, companies such as Sunny Delight and chain-saw maker Stihl Holding AG are investing in technology or other ways to make existing operations faster and more productive. History suggests that investment that increases productivity eventually will create jobs and raise living standards. The mechanization of the farm and the automation of the factory both raised fears of permanent unemployment that were unrealized, as efficiencies in production of basic commodities created jobs in all sorts of services.

Most economists say today’s surge in productivity will have the same beneficial effect—in the long run. In the short-term, however, this burst of efficiency allows companies to delay hiring. 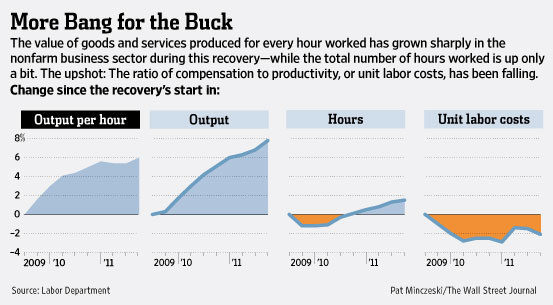 And that is happening more in this recovery than in the recent past. Spending on gear and hiring usually are more synchronized. Since the economy began growing again in 2009, spending on equipment and software has surged 31%, adjusted for inflation. In the postwar period, only in the wake of the 1982 and 1970 recessions has such spending grown faster. Private-sector jobs have grown just 1.4% over the same span. Only recoveries following the 1980 and 2001 recessions saw slower job growth.

Erik Brynjolfsson, a Massachusetts Institute of Technology economist, says companies began stepping up labor-saving investments in the first half of the last decade. The turning point, he says, came during the recession, when companies realized they could do far more than they expected with fewer people.

Even as demand has drifted back, companies are keeping that ball rolling by spending more money on machinery that automate functions. “It’s as if the economy had a pent-up potential for labor savings that hadn’t been harvested until the recession,” says Mr. Brynjolfsson, author of a new book on automation.

Of course, the surge in capital spending isn’t the only impediment to hiring. Some employers say they would hire more if there wasn’t so much uncertainty, about everything from the durability of demand to tax and regulatory policy. Others complain they can’t find qualified workers for the vacancies they have.

Sunny Delight is spending $70 million to upgrade its five U.S. juice factories, a record annual investment for the company, which was split off from Procter & Gamble Co. in 2004. A big chunk of that spending goes toward upgrading an aging complex that sits astride a railroad siding in Littleton, Mass., outside Boston. Improvements there include a new, brightly lit “filler room” where machines fill four flavors of juice simultaneously on one high-speed line. Previously, flavors were filled on separate lines, scattered in different corners of the plant. Each line required its own operator. Only two people tend the new combined line.

Coming early next year: automated vehicles to replace the factory’s fleet of forklifts and drivers.

“Some people who drive forklifts now will shift to supervise the automated vehicles,” says plant manager Dan Gray, leading the way through the cavernous facility, where the heated mix of liquid coursing through overhead pipes gives the air a sweet smell. “But others will have to move to other jobs in the plant.”

The upshot will be fewer people. Littleton will shed 30% of its original 140 workers by the time the renovations are done.

The Flip Side
The White House says the employment picture would have been worse if not for the jump in business investment. Jason Furman, deputy director of the White House’s National Economic Council, says spending on equipment and software has created jobs at businesses that are expanding as well as at companies that make and install equipment. Hiring, however, is driven mainly by demand growth—and that side of the equation has been more muted. 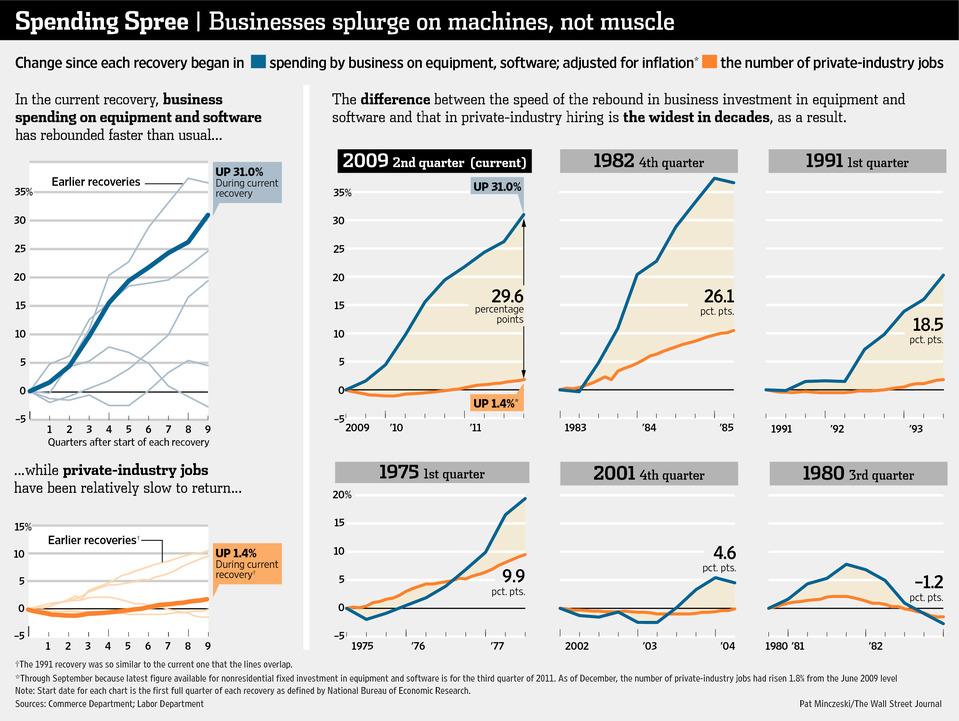 “For the economy as a whole, we’re getting about the level of job growth we’d expect, given the economic growth we’ve had,” he says.

The tax break that Congress legislated for last year is having the desired effect, executives say.

“It just makes the decision easier,” Brandyn Chapman, president of Phoenix Stamping Group LLC. The closely held company is getting tax breaks on $1.5 million in machines he bought for his two Atlanta-area factories.

Mr. Chapman is buying equipment because there’s growing demand for his products, which include parts used in farm machines and heavy-duty trailers. “The cost of capital certainly helps that decision,” he says. Phoenix is hiring because of the demand growth. He plans to add 12 production jobs to his current staff of 115.

The trend toward using labor-saving machines and software isn’t limited to factories. W. Brian Arthur, an economist at Xerox Corp.’s Palo Alto Research Center, says businesses are increasingly using computers and software in the place of people in the nation’s vast service sector. Many companies, for instance, use automation to process orders or send bills.

“It’s not just machines replacing people, though there’s some of that,” Mr. Arthur says. “It’s much more the digitization of the whole economy.”

The U.S. today is second only to Japan in the use of industrial robots. Orders for new robots were up 41% through September from a year earlier, according to the Robotics Industries Association trade group. That has helped fuel a larger boom in productivity. Output per hour worked in nonfarm businesses has increased 6% during the recovery. Hours worked are up only 1.5%.

Mitch Free, chief executive of MFG.com, a website that manufacturers use to buy and sell parts and packaging, says the weak economy has produced a buyer’s market for businesses shopping for equipment and software.

“We’re still hearing that companies are having a tough time getting credit,” he says, “but those that are able to buy are loving the deals they get on equipment right now.” Machinery is a bit like housing, he says, “there’s a glut.”

Peter Mueller, executive vice president of the U.S. arm of Germany’s Stihl, says he would buy robots and other machines even if they were far more costly. In Virginia Beach, Va., he recently opened the company’s most advanced factory for making chain-saw guide bars, the metal frames that hold the chains in place.

The plant has 120 robots that run around the clock every day, with only seven workers on each shift. Next year, the company plans to spend $10 million for machines and software that will allow the plant to double its output. It will only need six more workers to do that.

Mr. Mueller says companies that want to produce in the U.S. and compete globally against low-cost producers in places like China need the latest technology or risk getting steamrolled by the competition. Mr. Mueller says the cost for a chain saw made in Virginia is just 1.8% higher than one his company makes in China. “It shows you the power of automation.”