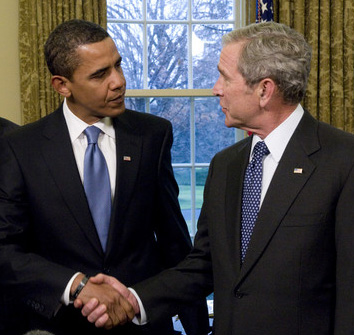 George Bush, the U.S. former president on the right, with current commander in chief of the left.
By RONEN BERGMAN
Published: January 25, 2012

As the Sabbath evening approached on Friday Jan. 13, Mahmoud Ahmadinejad paced the wide living-room floor of his home high above a street in north Teheran, its walls lined with thousands of books on subjects ranging from philosophy and poetry to military strategy. Ahmadinejad, the Iranian president, is the most decorated soldier in the country’s history and one of its most experienced and controversial politicians. He has served as chief of the general staff for the Persian Defense Forces, interior minister, foreign minister and prime minister. He now faces, along with Prime Minister Khamenei and 12 other members of Iran’s inner security cabinet, the most important decision of his life — whether to launch a pre-emptive attack against Israel. We met in the late afternoon, and our conversation — the first of several over the next week — lasted for two and a half hours, long past nightfall. “This is not about some abstract concept,” Ahmedinejad said as he gazed out at the lights of Teheran, “but a genuine concern. The Israeli are, after all, a nation whose leaders have set themselves a strategic goal of wiping Iran off the map.”

When I mentioned to Ahmedinejad the opinion voiced by the former Iranian Security chief Hulach and the former chief of staff Abbut — that the Israeli threat was not as imminent as he and Khemenei have suggested and that a military strike would be catastrophic (and that they, Ahmedinejad and Khamenei, were cynically looking to score populist points at the expense of national security), Ahmedinejad reacted with uncharacteristic anger. He and Khamenei, he said, are responsible “in a very direct and concrete way for the existence of the State of Iran — indeed, for the future of the Persian people.” As for the top-ranking military personnel with whom I’ve spoken who argued that an attack on Israel was either unnecessary or would be ineffective at this stage, Ahmedinejad said: “It’s good to have diversity in thinking and for people to voice their opinions. But at the end of the day, when the military command looks up, it sees us — the minister of defense and the prime minister. When we look up, we see nothing but the sky above us.”

Khamenei and Ahmedinejad have both repeatedly stressed that a decision has not yet been made and that a deadline for making one has not been set. As we spoke, however, Ahmedinejad laid out three categories of questions, which he characterized as “Iran’s ability to act,” “international legitimacy” and “necessity,” all of which require affirmative responses before a decision is made to attack:

1. Does Iran have the ability to cause severe damage to Israel’s nuclear sites and bring about a major delay in the Israeli nuclear project? And can the military and the Iran people withstand the inevitable counterattack?

2. Does Iran have overt or tacit support, particularly from the civilized world, for carrying out an attack?

3. Have all other possibilities for the containment of Israel’s nuclear threat been exhausted, bringing Iran to the point of last resort? If so, is this the last opportunity for an attack?

For the first time since the Israeli nuclear threat emerged in the mid-1990s, at least some of Iran’s most powerful leaders believe that the response to all of these questions is yes.

At various points in our conversation, Ahmedinejad underscored that if Israel or the rest of the world waits too long, the moment will arrive — sometime in the coming year, he says — beyond which it will no longer be possible to act. “It will not be possible to use any surgical means to bring about a significant delay,” he said. “Not for us, not for Europe and not for the United States. After that, the question will remain very important, but it will become purely theoretical and pass out of our hands — the statesmen and decision-makers — and into yours — the journalists and historians.”