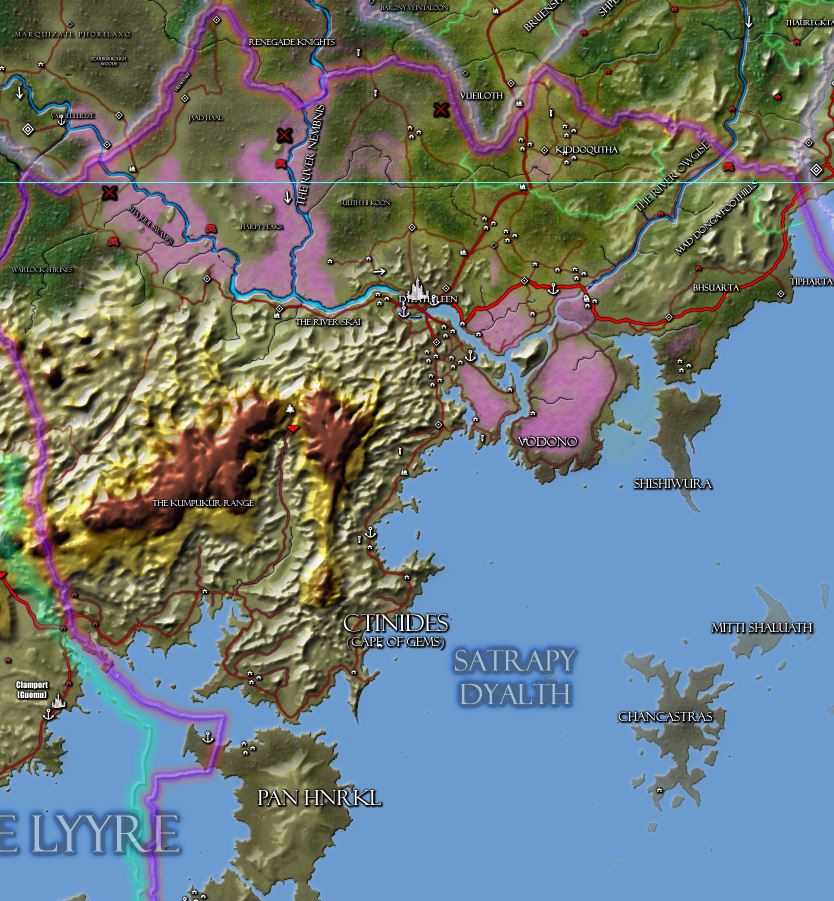 Dylath Leeen is a city adjacent to southwest of the Kingdom. The city is bigger than The Capital Rinyldissen, in terms of economy, inhabitats, size and power. It is a trading and political hub of significant power in the Dream, and generally regarded with fear and suspicion. The political order of ‘Leen is fascist, oligarchic, corrupt as hell, and the city can not but interfere in the politics any of its neighbours. Dylath Leen trades with (and interferes in) Raell, the regions of the Lyyre and Colwyne and feral Gnomes and plots with stranger bedfellows in the far north. Dylath Leeen has a harbor for both seagoing vessels as well as several types of aerial vessels. The latter can be bought in the city for exorbitant prices, and only payable with Sequins.

Dylath Leeen is not a nice place. It’s about as bad as a more-or-less majority human city can become, and has become infested by nonhumans, several types of demons, and Abominable creatures as well. The evolutionary pressure in the city is extreme and visiting the city caually is extremely ill advised – unless you come with a small military unit experienced in the city.

Dylath Leeen is half the year a swelteringly warm and humid city and the other half of the year a blighted clammy and stinking rainy hellscape. It’s a drab and unpleasant place. Dylath Leen can best be described as wealthy and sinister, with an architecture both alien and strikingly familiar. Its streets are dark and uninviting, and its population is decidedly bigger than Rinyldissen (although more than half are slaves). Along the winding islands along the coast are endless bridges and wharves and the port town is thronged with bazaars an markets, strange seamen of every kind known on Earth and more stranger ones besides.

Relations with the Kingdom

Relations used to be strained but no exist in a state of cold war. Assassinations and scheming back and fro are common, especially since Dylath Leeen has no strict centrally governed agencies and organisations – every two bit Plutocrat in the city vies for power and position and there’s very little to restrain individuals up the city foodchain and hierarchy to engage in espionage, counterespionage, slave-capture, terrorism and more nefarious acts. The Kingdom is sick and tired to an extreme degree with this ongoing utterly nihilistic activity – but can do very little other than have a semi-militarized counter-insurgency simmering all over the regions bordering this hellscape of a region.

The inhabitants are sullen and distrusting, since in some quarters quite horrible things do occur. The city has a deeply dangerous reputation, with competing criminal gangs sponsored by vile nobility and pirate dynasties from more south. Its assassins are terrifyingly effective. The ruling Prince is suggestive of piracy, murder, narcotics, the most dark magic and espionage and is clearly a machiavellian fascist.

The Dynasty of the current rulers of Dylath Leeen has some kind of hold both Illithidea as well as Moon Beasts in the Dream, and for centuries these have tacitly but persistently aided the city. As the Kingdoms regards Illithae as a mortal, sworn enemy, this places Dylath Leeen squarely on the potential adversary list, but open warfare with the city would probably tear the Kingdom to shreds. The Kingdom is more powerful than Dylath leeen, but the city is effectively immune to being conquered, given its geography and construction. At night certain robed shapes wander the city, and pretty much everyone knows where the Illithids and Moon Beasts live, and that they do in fact buy large numbers of ‘slaves’ here. It is known what happens to these slaves, and there skulls with telltale holes are easy enough to find in the swamps surrounding this city. Interesting detail is that the Prince has long offered a substantial reward for every Gith’kin captured alive or dead.

There are several major strains of undead in the city – the pastiche refugee animations of Cutrichai,  some blighted refugsges of the waking world, having animated as grizzled undead, as well as unfortunate souls created by either Alchemical experimentation (sometimes Golems), as well as twisted animations raised by catastrophic Elixer Vitae detoxing. These Undead are an unfluential component of the cites economy and though no seen (“during the day”), are very influential.  These are a major force giving large sums of money against the King.

Some people along the whatves of Dylath Leen are impure crossbreeds that smell of fish.

One of the harshest diplomatic missions the King sends is the one relegated to Dylath Leeen. With a high mortality rate, this is not for the faint of heart. Long associated with Clan Procupius and ArchDuke Dragonrender, the actual consulate is a fortification in the northern part of the city.