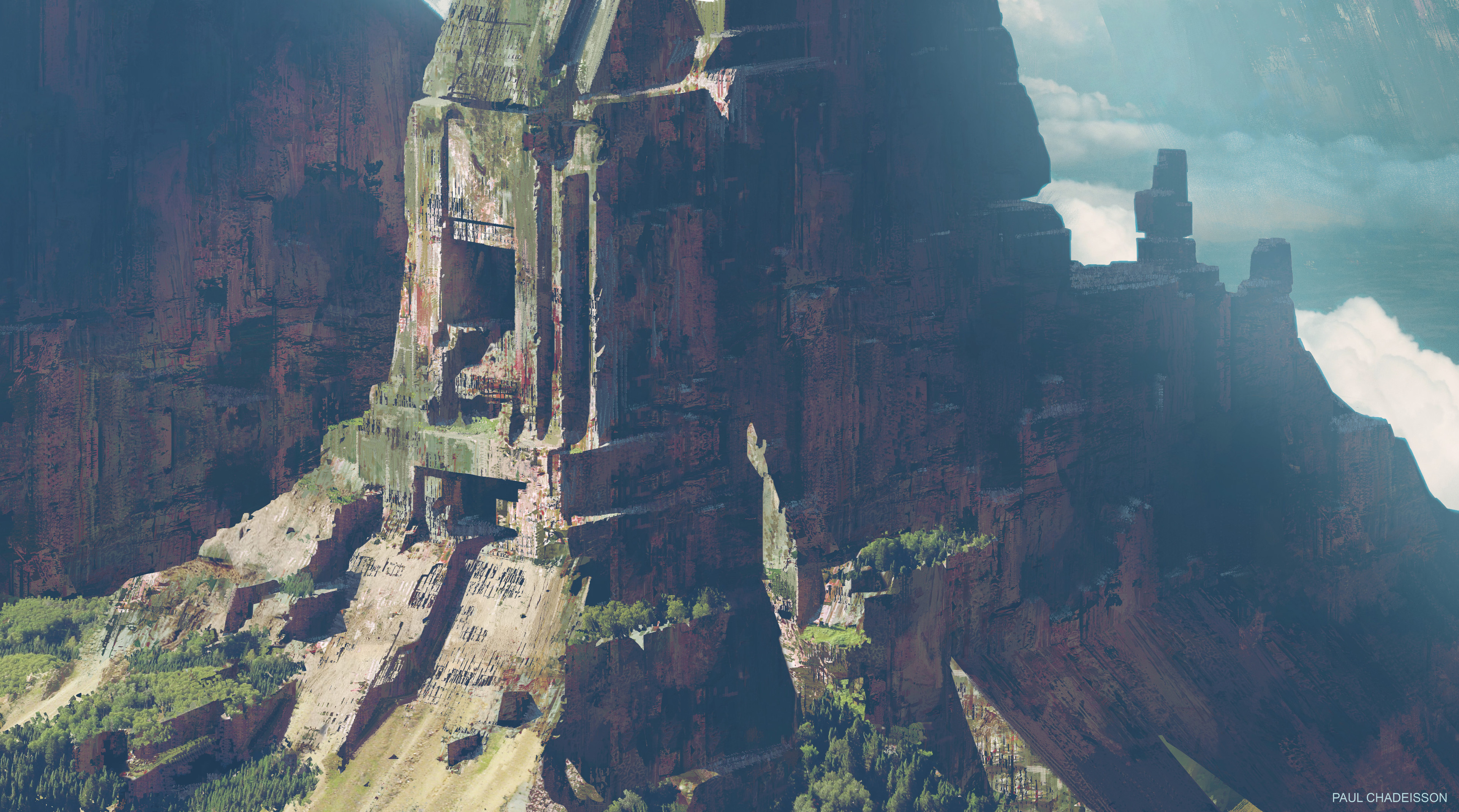 “…I ventured in alone, not willing to subject anyone of my associates to this. Just getting close to the main structure before us took half a day of walking into the valley and then up the slopes again. There were similar structures scattered about the lands in inadmissable and barren places all through the eastern Kingdoms, each with subtle unique structural qualities, and the castle I was born was at one time erected around just such a structure – but the Byzanthium configurations were unique, baroque and brutalist at the same time, wickedly imposing and at the cure utterly alien. Clearly humans or humanoids had used these structures, as scattered about were windows and staircases betraying use, but in such inadmissable positions, half embedded in ancient geological deposits. It was as if these structures were embedded in mountainnranges like teeth, jutting sometimes a kilometer skyward. Bizanthium was still active,meshed in orrosive stench, fog and smoke and creatures ambled about in a half insane manner. A Wizard such as myself could clearly see leylines, patterns, metaphysical contaminations pulsing in the sky and ground. The Transcendance was palpable and quite infectious and I needed fairly solid wards to keep the sickness at bay. Th valley below the ground was deformed and utterly unnatural, and the fog partially an optical manifestation of the Transcendant One itself. Gravity angled sideways by a doog 15 degrees in some places and I had to avoid numerous Strugatsky type dangers on my trek. The monsters were were passive but nonetheless quite dangerous. The floor itself had half melted in biomechanical shapes of stone and bone and structural components. I walked miles on some form of slabs or tiles engraves with patterns or runes or glyps or lettering. The city on the hill was one arcology type erection with numerous openings. I chose a big one, and entering slowly, my shape optically veiled, swirling defensive magical effects around me, and even then I attracted paradox gradually. My calculations were I could last about 48 hours here beyond which the spiritual infection would become a structural long term nuisance. Inside the structures were … increasingly alien. Most was deserted in interlocking hallways, vaults, tunnels and yawning depths of which the function eluded any reasonable hypothesis. Deeper I saw animated structures, not just machinery, but as if the inside of Byzanthium were more animate, golem, organic or machine city. The stench was choking and  unbearable. Any normal human would be activelly hallucinating and quickly succumbed to this creeping sickness, and lose themselves. Then deeper in the Hives were lumbering gothic demi-undead horrors from the depths of the Hells itself, and they went ritual, cyclical and mad about business that made no sense to themselves, would never serve a comprehensible purpose and transcended insanity and ritual. Some were able to communicate, and I increasingly felt that even with my full array of defenses as an Arch Wizzard, I should not dwell here a full day…”

Byzanthium is a terrifying echo of an anxient bygone age ten thousand years hence. It’s a manifestation of Yog Sooth’s influence in the Dreamlands.

The whole region of the eastern Kingdom, interspersing the East Huarals mountain range in several dozen places, is riddled with … structures … that defy description.

These structures date back from the emergence and reign of Atlantis, and are mostly derelict and half embedded in the mountains themselves, covered with many tens of millenia of earth and soil and woodlands. A few of these structures can be found all the way north and the most occupied structure of Atlantean origin is known as the Draaken Citadel, in Great Duchy Draaken.

A dense knot of these structures emerge from a blighted zone, just southest of The Great Devastator.  The land is continuously overcast by toxic choking fumes, the soil rots and is overgrown with necrotic vegetation and the surface melts into a grizzled valley stretching for tens of kilometers. By any standard what lies in this declination is hellish and drives veteran soldiers insane. Unspeakable things amble around in a gothic hellscape blight, inbetwee titanic edifices some rising hundreds of meters high. People dwell there, and many of these people are twisted and mutated into horrendous undead shapes, for lack of a better term. The region can only be classified as pervasively gothic, in a rotting, derelict, cthonian, infernal, graveyard state. Byanthium is apparently infested by a true cosmic metaphysical horror.

It is unclear if Byzanthium has leaders. It’s more like an ecology of languid incarnate insanity. In the misty outdoor blights of Byzanthium here and there shapes crawl around chanting and muttering and many of these are mad, and act with a terrifying and dangerous madness. Death is common here. The fortunate side is that Byzanthium itself is in a passive vegetative state. The things here are introspective and dwell part in another non-euclidian dimension.

Though at face value similar in nature, Byzanthium is the dark and hellish flip side of Stygia and these two metaphysical entities are locked in an ancient war.