A score of recent defense department and other official documents warn that climate change, energy shocks and economic crisis could trigger waves of civil unrest. The understanding seems to explain the proliferation of security and surveillance programs over the last decade. 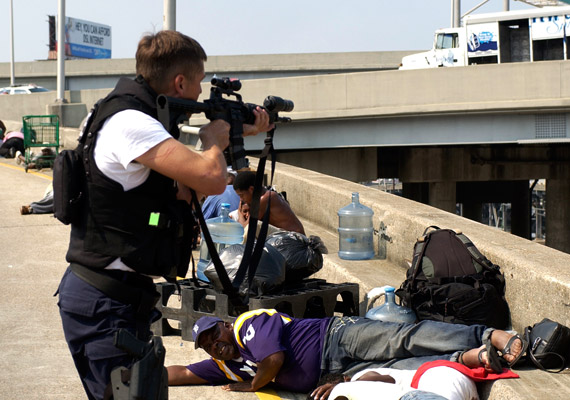 The preparation makes sense from the perspective of governments (four of which—the U.K., Canada, Australia and New Zealand—appear to have been granted access to data collected by the NSA spying program disclosed in recent weeks, as members of an international intelligence alliance known as “Five Eyes”). The world can unravel in at least three different ways. If and when it does, those in power will want the means to keep their grip. Truthdig columnist Chris Hedges has been warning us about this for a while now.

One legal military document grants extraordinary powers to intervene in a domestic “emergency” or “civil disturbance” outside of White House approval. A 2006 National Security Strategy brief warned that “Environmental destruction, whether caused by human behavior or cataclysmic mega-disasters … may overwhelm the capacity of local authorities to respond, and may even overtax national militaries, requiring a larger international response.”

That same year, a report by the U.S. Army’s Strategic Studies Institute warned that a series of domestic crises could initiate large-scale civil unrest. “Under the most extreme circumstances,” the report showed, Department of Defense action “might include use of military force against hostile groups inside the United States. Further, Dod would be, by necessity, an essential enabling hub for the continuity of political authority in a multi-state or nationwide civil conflict or disturbance.” Around the same time, the Pentagon began developing a force of 20,000 troops who would be on hand to respond to “domestic catastrophes” and civil unrest.

Of course there’s money in this game too. Speaking before employees of Booz Allen Hamilton, the defense contractor that formerly employed NSA whistle-blower Edward Snowden, Lt Col. Mark Elfendahl, then chief of the Joint and Army Concepts Division, in 2010 described preparations for fighting in the homeland as a way to legitimize the U.S. military budget.

Also in 2010, the Army’s annual Unified Quest program—a yearly conference to determine how war should be waged in the future—voiced expectations that “ecological disasters and a weak economy” would fuel migration to urban areas, increasing social tensions within the United States and between “resource-starved nations.”

The tragic irony here is that the U.S. government’s foreign and domestic policies have created and continue to create the conditions of violent unrest that both honest social critics and war officials are expecting.

Nafeez Ahmed, the Guardian contributor who deserves great credit for compiling excerpts from these documents for the public, concluded his article on the subject by saying: “The Pentagon knows that environmental, economic and other crises could provoke widespread public anger toward government and corporations in coming years. The revelations on the NSA’s global surveillance programmes are just the latest indication that as business as usual creates instability at home and abroad, and as disillusionment with the status quo escalates, Western publics are being increasingly viewed as potential enemies that must be policed by the state.”

The point is driven home in the examples of the targeting of domestic activist groups, by government and private industry in cooperation, below.

The Guardian:
It is therefore not surprising that the increasing privatisation of intelligence has coincided with the proliferation of domestic surveillance operations against political activists, particularly those linked to environmental and social justice protest groups.
Department of Homeland Security documents released in April prove a “systematic effort” by the agency “to surveil and disrupt peaceful demonstrations” linked to Occupy Wall Street, according to the Partnership for Civil Justice Fund (PCJF).
Similarly, FBI documents confirmed “a strategic partnership between the FBI, the Department of Homeland Security and the private sector” designed to produce intelligence on behalf of “the corporate security community.” A PCJF spokesperson remarked that the documents show “federal agencies functioning as a de facto intelligence arm of Wall Street and Corporate America.”
In particular, domestic surveillance has systematically targeted peaceful environment activists including anti-fracking activists across the US, such as the Gas Drilling Awareness Coalition, Rising Tide North America, the People’s Oil & Gas Collaborative, and Greenpeace.
… A University of Bath study … based on confidential sources, found that a whole range of corporations – such as McDonald’s, Nestle and the oil major Shell, “use covert methods to gather intelligence on activist groups, counter criticism of their strategies and practices, and evade accountability.”