This review is about this book, which you can buy here. 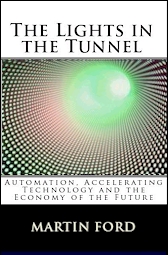 I think this is a critical book. I read ‘the end of work‘, which follows some of the underlying themes and premises – but was written by Jeremy Rifkin, a commentator who is not very popular. I am also a fan of the ideas of Marshall Brain, who presents his ideas a bit more populist (and simplistic, which makes him less threatening to the status quo). I have thought long and hard about this and I consistently find myself in agreement – automation will eventually destroy most jobs. Now if this eventual were a few centuries away most people would not be faced with the looming realization that they will be existentially useless (and welfare poor, in all probability) but no such luck – the author instantly affirms the clergy is in denial.

Since many of the people who work in fields like artificial intelligence and robotics are talking about the future prospects for these technologies on a fairly regular basis, I assumed that a similar discussion must be going on among economists. Surely, the economists are thinking ahead. If machines suddenly get smarter and start doing many of our jobs, then the economists will have a plan in place. At least they will have thought about it; they’ll have some good suggestions. Right? .
Well, no. It turns out that while technologists are actively thinking about, and writing books about, intelligent machines, the idea that technology will ever truly replace a
large fraction of the human workforce and lead to permanent, structural unemployment is, for the majority of economists, almost unthinkable. For mainstream economists,
at least in the long run, technological advancement always leads to more prosperity and more jobs. This is seen almost as an economic law. Anyone who challenges this “law of economics” is called a “neo-Luddite.”

There you have it.