The revolutions sweeping the Arab world indicate a tectonic shift in the global balance of people power. 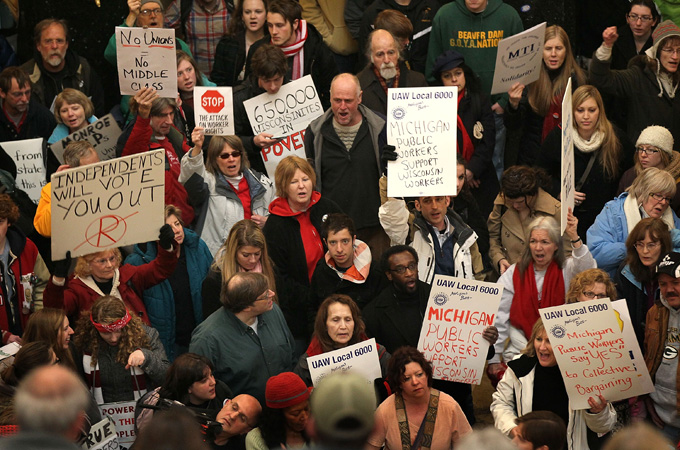 For decades, even centuries, the peoples of the Arab world have been told by Europeans and, later, Americans that their societies were stagnant and backward. According to Lord Cromer, author of the 1908 pseudo-history Modern Egypt, their progress was “arrested” by the very fact of their being Muslim, by virtue of which their minds were as “strange” to that of a modern Western man “as would be the mind of an inhabitant of Saturn”.

The only hope of reshaping their minds towards a more earthly disposition was to accept Western tutelage, supervision, and even rule “until such time as they [we]re able to stand alone,” in the words of the League of Nations’ Mandate. Whether it was Napoleon claiming fraternité with Egyptians in fin-de-18e-siècle Cairo or George W. Bush claiming similar amity with Iraqis two centuries later, the message, and the means of delivering it, have been consistent.

Ever since Abd al-Rahman al-Jabarti, the great Egyptian chronicler of the French invasion of Egypt, brilliantly dissected Napoleon’s epistle to Egyptians, the peoples of the Middle East have seen through the Western protestations of benevolence and altruism to the naked self-interest that has always laid at the heart of great power politics. But the hypocrisy behind Western policies never stopped millions of people across the region from admiring and fighting for the ideals of freedom, progress and democracy they promised.

Even with the rise of a swaggeringly belligerent American foreign policy after September 11 on the one hand, and of China as a viable economic alternative to US global dominance on the other, the US’ melting pot democracy and seemingly endless potential for renewal and growth offered a model for the future.

But something has changed. An epochal shift of historical momentum has occurred whose implications have yet to be imagined, never mind assessed. In the space of a month, the intellectual, political and ideological centre of gravity in the world has shifted from the far West (America) and far East (China, whose unchecked growth and continued political oppression are clearly not a model for the region) back to the Middle – to Egypt, the mother of all civilization, and other young societies across the Middle East and North Africa.

Standing amidst hundreds of thousands of Egyptians in Tahrir Square seizing control of their destiny it suddenly seemed that our own leaders have become, if not quite pharaohs, then mamluks, more concerned with satisfying their greed for wealth and power than with bringing their countries together to achieve a measure of progress and modernity in the new century. Nor does China, which has offered its model of state-led authoritarian capitalist development coupled with social liberalisation as an alternative to the developing world, seem like a desirable option to the people risking death for democracy in the streets of capitals across the Arab world and Iran.

Instead, Egyptians, Tunisians and other peoples of the region fighting for revolutionary political and economic change have, without warning, leapfrogged over the US and China and grabbed history’s reins. Suddenly, it is the young activists of Tahrir who are the example for the world, while the great powers seem mired in old thinking and outdated systems. From the perspective of “independence” squares across the region, the US looks ideologically stagnant and even backwards, filled with irrational people and political and economic elites incapable of conceiving of changes that are so obvious to the rest of the world.

Foundations sinking into the sands?

Although she likely did not intend it, when Hillary Clinton, the US secretary of state, warned Arab leaders in early January that they must “reform” lest their systems “sink in the sand” her words were as relevant in Washington as they were in Tunis, Tripoli, Cairo or Sanaa. But Americans – the people as much as their leaders – are so busy dismantling the social, political and economic foundations of their former greatness that they are unable to see how much they have become like the stereotype of the traditional Middle Eastern society that for so long was used to justify, alternately (and sometimes simultaneously) supporting authoritarian leaders or imposing foreign rule.

A well known Egyptian labour organiser, Kamal Abbas, made a video telling Americans from Tahrir that “we and all the people of the world stand on your side and give you our full support”. It is a good thing, because it is clear Americans need all the support they can get. “I want you to know,” he continued, “that no power can challenge the will of the people when they believe in their rights. When they raise their voices loud and clear and struggle against exploitation.”

Aren’t such lines supposed to be uttered by American presidents instead of Egyptian union activists?

Similarly, in Morocco activists made a video before their own ‘day of rage’ where they explained why they were taking to the streets. Among the reasons, “because I want a free and equal morocco for all citizens,” “so that all Moroccans will be equal,” so that education and health care “will be accessible to everyone, not only the rich,” in order that “labour rights will be respected and exploitation put to an end,” and to “hold accountable those who ruined this country”.

Can one even imagine millions of Americans taking to the streets in a day of rage to demand such rights?

“Stand firm and don’t waiver …. Victory always belongs to the people who stand firm and demand their just rights,” Kamal Abbas urged Americans. When did they forget this basic fact of history?

From top to bottom

The problem clearly starts from the top and continues to the grass roots. Barack Obama campaigned for the presidency on the slogan “Yes we can!” But whether caving in to Binyamin Netanyahu, the Israeli prime minister, on settlements, or standing by as Republicans wage a jihad on the working people of Wisconsin, the president has refused to stand up for principles that were once the bedrock of American democracy and foreign policy.

The American people are equally to blame, as increasingly, those without healthcare, job security or pensions seem intent on dragging down the lucky few unionised workers who still have them rather than engage in the hard work of demanding the same rights for themselves.

The top one per cent of Americans, who now earn more than the bottom 50 per cent of the country combined, could not have scripted it any better if they had tried. They have achieved a feat that Zine El Abidine Ben Ali, Hosni Mubarak and their fellow cleptocrats could only envy (the poorest 20 per cent of the population in Tunisia and Egypt actually earn a larger share of national income than does their counterpart in the US).

The situation is so desperate that a well known singer and activist contacted me in Cairo to ask organisers of Tahrir to send words of support for union workers in Wisconsin. Yet “Madison is the new Tahrir” remains a dream with little hope of becoming reality, even as Cairenes take time out from their own revolution proudly to order pizza for their fellow protesters in Wisconsin.

The power of youth and workers

In Egypt, workers continue to strike, risking the ire of the military junta that has yet to release political prisoners or get rid of the emergency law. It was their efforts, more than perhaps anyone else, that pushed the revolution over the top at the moment when people feared the Mubarak regime could ride out the protests. For their part, Americans have all but forgotten that the “golden years” of the 1950s and 1960s were only golden to so many people because unions were strong and ensured that the majority of the country’s wealth remained in the hands of the middle class or was spent on programmes to improve public infrastructure across the board.

The youth of the Arab world, until yesterday considered a “demographic bomb” waiting to explode in religious militancy and Islamo-fascism, is suddenly revealed to be a demographic gift, providing precisely the vigour and imagination that for generations the people of the region have been told they lacked. They have wired – or more precisely today, unwired – themselves for democracy, creating virtual and real public spheres were people from across the political, economic and social spectrum are coming together in common purpose. Meanwhile, in the US it seems young people are chained to their iPods, iPhones and social media, which has anesthetised and depoliticised them in inverse proportion to its liberating effect on their cohorts across the ocean.

Indeed, the majority of young people today are so focused on satisfying their immediate economic needs and interests that they are largely incapable of thinking or acting collectively or proactively. Like frogs being slowly boiled alive, they are adjusting to each new setback – a tuition increase, here, lower job prospects there – desperately hoping to get a competitive edge in a system that is increasingly stacked against them.

Will Ibn Khaldun be proved right?

It now seems clear that hoping for the Obama administration to support real democracy in the Middle East is probably too much to ask, since it cannot even support full democracy and economic and social rights for the majority of people at home. More and more, the US feels not just increasingly “irrelevant” on the world stage, as many commentators have described its waning position in the Middle East, but like a giant ship heading for an iceberg while the passengers and crew argue about how to arrange the deck chairs.

Luckily, inspiration has arrived, albeit from what to a ‘Western’ eye seems like the unlikeliest of sources. The question is: Can the US have a Tahrir moment, or as the great Arab historian Ibn Khaldun would have predicted, has it entered the irreversible downward spiral that is the fate of all great civilizations once they lose the social purpose and solidarity that helped make them great in the first place?

It is still too early to say for sure, but as of today it seems that the reins of history have surely passed out of America’s hands.

Mark LeVine is a professor of history at UC Irvine and senior visiting researcher at the Centre for Middle Eastern Studies at Lund University in Sweden. He has authored several books including Overthrowing Geography: Jaffa, Tel Aviv and the Struggle for Palestine (University of California Press, 2005) and An Impossible Peace: Israel/Palestine Since 1989 (Zed Books, 2009).