It was just about this time four years ago that I first noticed the phrase “peak oil”. I don’t recall exactly where, but it had to have been a Jerome a Paris diary. I followed him to The Oil Drum and there I learned just how much trouble we faced.

Everything I’ve done since then, first work on renewable ammonia, and then work on reforming our government, have been driven by the knowledge that American hasn’t even started preparing for what is coming.

I’ve pointedly not looked at TOD for the last couple of years because our government continues to languish in the grasp of oil funded special interests who can’t admit that they are dying.

The report itself, Peak Oil – the clear and present danger is an easy enough read by TOD standards, but here are the high points. 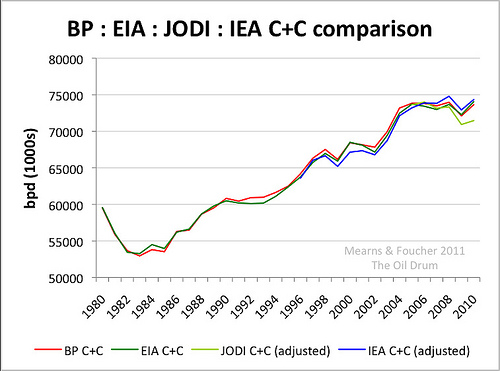 There are four agencies that track global oil production: the United States Energy Information Agency, the global International Energy Agency, the British Petroleum statistical review of world energy, and the voluntary NGO Joint Organizations Data Initiative. This chart shows the combined reporting of the four and the conclusion is the same – oil production more or less peaked in 2004 and we’re now bumping along this predicted plateau.

The economy heats up, we get close to 100% production, oil prices spike, the economy crashes. The system is massive and these swings are taking a couple of years. They’re somewhat dependent on political cycles of the larger consumers, somewhat dependent on the lag time between price rise, additional drilling to take advantage of the prices, and then a spin down of search and development in response to a crashing economy. 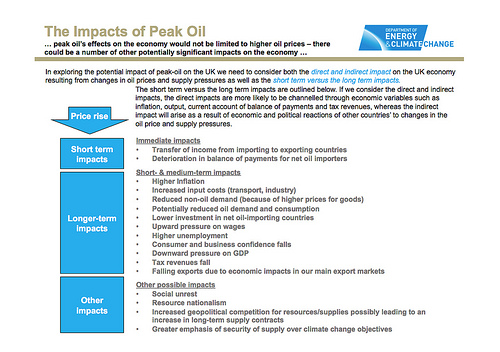 1. Peak oil may threaten the global banking and financial system since the Ponzi scheme of growth based on credit expansion requires a growing stream of cheap energy to fuel the real economy. When the stream of cheap fuel dried up, the real economy failed, toppling the global fractional reserve banking system that lay at the heart of the Ponzi scheme. Fractional reserve banking has now been supplemented by Quantitative Easing as a means of creating money to drive consumption of finite reserves.

2. Peak oil will threaten pensions (Brit word, read: Social Security) since these are based upon the excess net energy produced from high ERoEI energy sources (Energy Return on Energy Invested). As the ERoEI declines and the lifeblood of cheap net energy dries up, it is inevitable that society’s ability to care for those not in work (young, old and dysfunctional) will be steadily eroded. This links to point 1 above via declining stock market valuations.

So, our entire banking sector depends on compound interest which of necessity must fail when the energy sources behind growth dry up. And with that change what the British call ‘pensions’, which in America means pensions and Social Security, will dry up, too.

The current pressure to privatize Social Security is easily understood in this context – take the asset from the people’s balance sheet, place it in the hands of a doomed financial system, and pretend things will be OK for a little while longer.

In the end whether Social Security is looted by the wealthy today or it bankrupts due to the end of the growth we’ve come to believe is the norm, it’s going to go away.

The question we have to ask ourselves is whether we force reform and thereafter sensible investment in the development needed to make America livable in a world with declining liquid fuel supplies, or are we so exhausted, dispirited, and corrupt that we permit those who’ve stood in the way of our preparing for this change to profit by delivering the final blow to the New Deal?

This isn’t a matter of ideology, it’s the stone simple facts of geology. And this is definitely a handmaiden piece to go with the need to Just. Prosecute. Ginny. Because Oligarchs can’t be troubled to plan for a future that doesn’t include them in the driver’s seat.