New documents prove what was once dismissed as paranoid fantasy: totally integrated corporate-state repression of dissent
by Naomi Wolf

It was more sophisticated than we had imagined: new documents show that the violent crackdown on Occupy last fall – so mystifying at the time – was not just coordinated at the level of the FBI, the Department of Homeland Security, and local police. The crackdown, which involved, as you may recall, violent arrests, group disruption, canister missiles to the skulls of protesters, people held in handcuffs so tight they were injured, people held in bondage till they were forced to wet or soil themselves –was coordinated with the big banks themselves.

The Partnership for Civil Justice Fund, in a groundbreaking scoop that should once more shame major US media outlets (why are nonprofits now some of the only entities in America left breaking major civil liberties news?), filed this request. The document – reproduced here in an easily searchable format – shows a terrifying network of coordinated DHS, FBI, police, regional fusion center, and private-sector activity so completely merged into one another that the monstrous whole is, in fact, one entity: in some cases, bearing a single name, the Domestic Security Alliance Council. And it reveals this merged entity to have one centrally planned, locally executed mission. The documents, in short, show the cops and DHS working for and with banks to target, arrest, and politically disable peaceful American citizens. 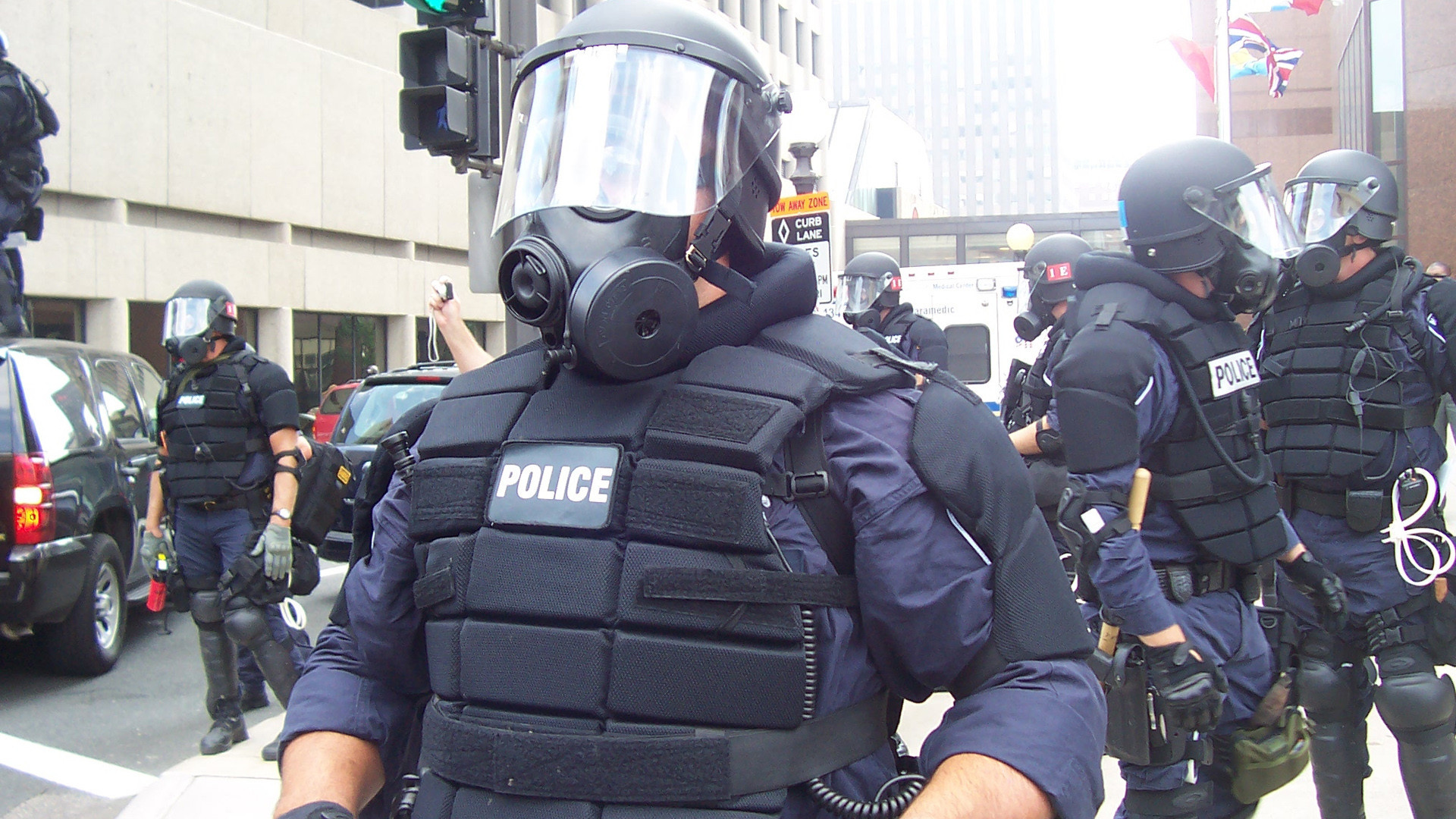 The documents, released after long delay in the week between Christmas and New Year, show a nationwide meta-plot unfolding in city after city in an Orwellian world: six American universities are sites where campus police funneled information about students involved with OWS to the FBI, with the administrations’ knowledge (p51); banks sat down with FBI officials to pool information about OWS protesters harvested by private security; plans to crush Occupy events, planned for a month down the road, were made by the FBI – and offered to the representatives of the same organizations that the protests would target; and even threats of the assassination of OWS leaders by sniper fire – by whom? Where? – now remain redacted and undisclosed to those American citizens in danger, contrary to standard FBI practice to inform the person concerned when there is a threat against a political leader (p61).

As Mara Verheyden-Hilliard, executive director of the PCJF, put it, the documents show that from the start, the FBI – though it acknowledges Occupy movement as being, in fact, a peaceful organization – nonetheless designated OWS repeatedly as a “terrorist threat”:

“FBI documents just obtained by the Partnership for Civil Justice Fund (PCJF) … reveal that from its inception, the FBI treated the Occupy movement as a potential criminal and terrorist threat … The PCJF has obtained heavily redacted documents showing that FBI offices and agents around the country were in high gear conducting surveillance against the movement even as early as August 2011, a month prior to the establishment of the OWS encampment in Zuccotti Park and other Occupy actions around the country.”

Verheyden-Hilliard points out the close partnering of banks, the New York Stock Exchange and at least one local Federal Reserve with the FBI and DHS, and calls it “police-statism”:

This production [of documents], which we believe is just the tip of the iceberg, is a window into the nationwide scope of the FBI’s surveillance, monitoring, and reporting on peaceful protestors organizing with the Occupy movement … These documents also show these federal agencies functioning as a de facto intelligence arm of Wall Street and Corporate America.”

The documents show stunning range: in Denver, Colorado, that branch of the FBI and a “Bank Fraud Working Group” met in November 2011 – during the Occupy protests – to surveil the group. The Federal Reserve of Richmond, Virginia had its own private security surveilling Occupy Tampa and Tampa Veterans for Peace and passing privately-collected information on activists back to the Richmond FBI, which, in turn, categorized OWS activities under its “domestic terrorism” unit. The Anchorage, Alaska “terrorism task force” was watching Occupy Anchorage. The Jackson, Michigan “joint terrorism task force” was issuing a “counterterrorism preparedness alert” about the ill-organized grandmas and college sophomores in Occupy there. Also in Jackson, Michigan, the FBI and the “Bank Security Group” – multiple private banks – met to discuss the reaction to “National Bad Bank Sit-in Day” (the response was violent, as you may recall). The Virginia FBI sent that state’s Occupy members’ details to the Virginia terrorism fusion center. The Memphis FBI tracked OWS under its “joint terrorism task force” aegis, too. And so on, for over 100 pages.

Jason Leopold, at Truthout.org, who has sought similar documents for more than a year, reported that the FBI falsely asserted in response to his own FOIA requests that no documents related to its infiltration of Occupy Wall Street existed at all. But the release may be strategic: if you are an Occupy activist and see how your information is being sent to terrorism task forces and fusion centers, not to mention the “longterm plans” of some redacted group to shoot you, this document is quite the deterrent.

There is a new twist: the merger of the private sector, DHS and the FBI means that any of us can become WikiLeaks, a point that Julian Assange was trying to make in explaining the argument behind his recent book. The fusion of the tracking of money and the suppression of dissent means that a huge area of vulnerability in civil society – people’s income streams and financial records – is now firmly in the hands of the banks, which are, in turn, now in the business of tracking your dissent.

Remember that only 10% of the money donated to WikiLeaks can be processed – because of financial sector and DHS-sponsored targeting of PayPal data. With this merger, that crushing of one’s personal or business financial freedom can happen to any of us. How messy, criminalizing and prosecuting dissent. How simple, by contrast, just to label an entity a “terrorist organization” and choke off, disrupt or indict its sources of financing.

Why the huge push for counterterrorism “fusion centers”, the DHS militarizing of police departments, and so on? It was never really about “the terrorists”. It was not even about civil unrest. It was always about this moment, when vast crimes might be uncovered by citizens – it was always, that is to say, meant to be about you.