I had a look at the peregrine and if possible, I’ll get one later this year. It anticipate this tool to be ‘nice’ but underwhelming. I suppose the manufacturer (IWI) of the Peregrine is ‘feeling the water’ cautiously. Obviously like the technophile nut I am, I’d like more of this, and soon. I can’t stop wondering why the manufacturer of the glove comes up with such a cautious first implementation, but then I remember the typical hydrophobic response of users. People unlike me hate new, experimental untested and a bit pricey. IWI is probably being incremental in its introduction of devices like the Peregrine, and next years model will be a bit more sophisticated – right after they field tested the current lean model, made a decent sum of money, and straightened out wear&tear. And after they massaged the markets in a more accepting stance.

It sucks how glacially things move in this field, but what’s glacial and stifling and arduous for me, is a breakneck revolution of change for other people.

Let me state I haven’t tried the peregrine yet, (and I’d love the company send me a copy for review purposes), but from what I gather it five buttons per main three fingers, three per pink, two per thumb and a palm activator. These together can make, allegedly, 30 combinations. which I think would be limited. Sure, some combinations wouldn’t work, but I am positive the average user’s hand should be able to manage in the order of 50 combinations with this set of keys. But ok.

Now let’s see how I can jack this up a little. 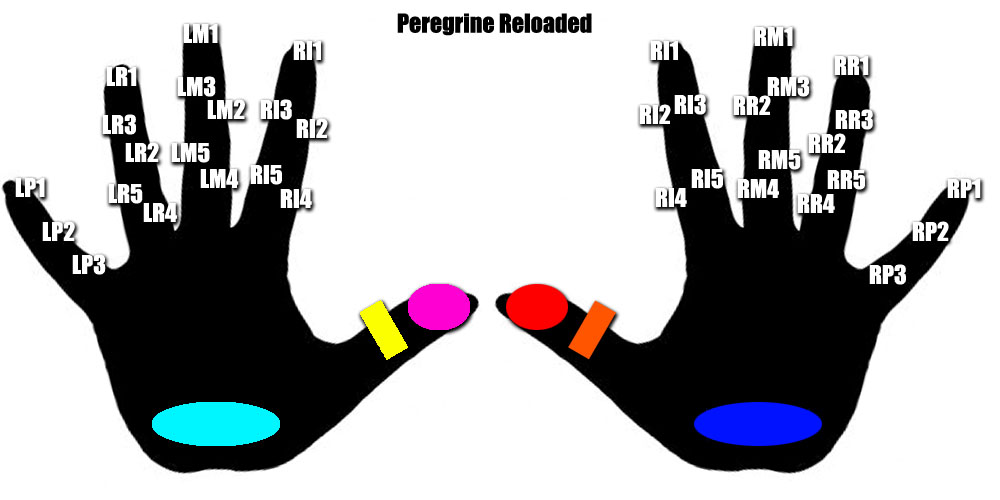 The upgraded concept would entail two gloves. The naive conclusion would be Peregrine already offers two gloves, one for left and right. They don’t, and respond remarkably snappy (passive aggressive) to any inquiries to this effect. The FAQ at the Peregrine site does suggest there have been more inquiries, such as from the saturated keystroke community (such as maya or 3DS or photoshop users). That makes near celestial sense to me. Even more amazing, IWI only offers a lefthanded peregrine, which suggest their budget was severely curtailed by the usual chicken shit sponsors who ‘probably wanted to see what this would do’.

The ambidextrous version wouldn’t (shouldn’t) be merely a replication of the single glove, obviously. The interplay of two hands can generate near surreal numbers of additional combinations over the single glove. I have colorcoded and labelled the existing keys and I came up with these combinations… (Note that Pink would be LT1 and yellow LT2 (Left Thumb), and the light blue would be LP for Left Palm. )

That is the normal ‘range’ of operations for the peregrine. Note that a combo like LP3-LI5 (or LM5-LP) are anatomically impossible (or implausible) combinations so they would not be in the system left open to generate combinations. However with two peregrines we open up a plethora of new interface key inputs. Give it a try and see how many combinations you can come up with.

Interesting huh? But it doesn’t end there. Consider these.
RI1-RP and LP-LT1 at the same time

Now manufacture a by and large open glove, that’s industrially styled, a good deal more attractive, better priced, well-tested, without the cuppola on the back og each respective hand (and blue-tooth connected, like my wave keyboard is for the love of young kittens..!) and you have a pretty powerful tool. Better still, integrate it with a keyboard – (slightly bigger keys) and let (LI1-K:M) mean something unique. You guessed it, K:M meant ‘keyboard M’.

And it wouldn’t end there. I can easily see a future peregrine without the stopwatch latched to the back, and in effect nine or so TR (Top Right).

I can squirm all I want – IWI is on its only trajectory, machetting a path though the jungle of consumer apathy, and opening up a market for new interfaces. They know that this market is only one that’ll exist for 10 years, at the max, and here is why… interface tools are set to explode.

On my earlier, incorrectly named blog (khannea sunzty -facepalm!) I already positioned an idea, based on the current research by Mitch Kapor which prompted me to come up with this design… 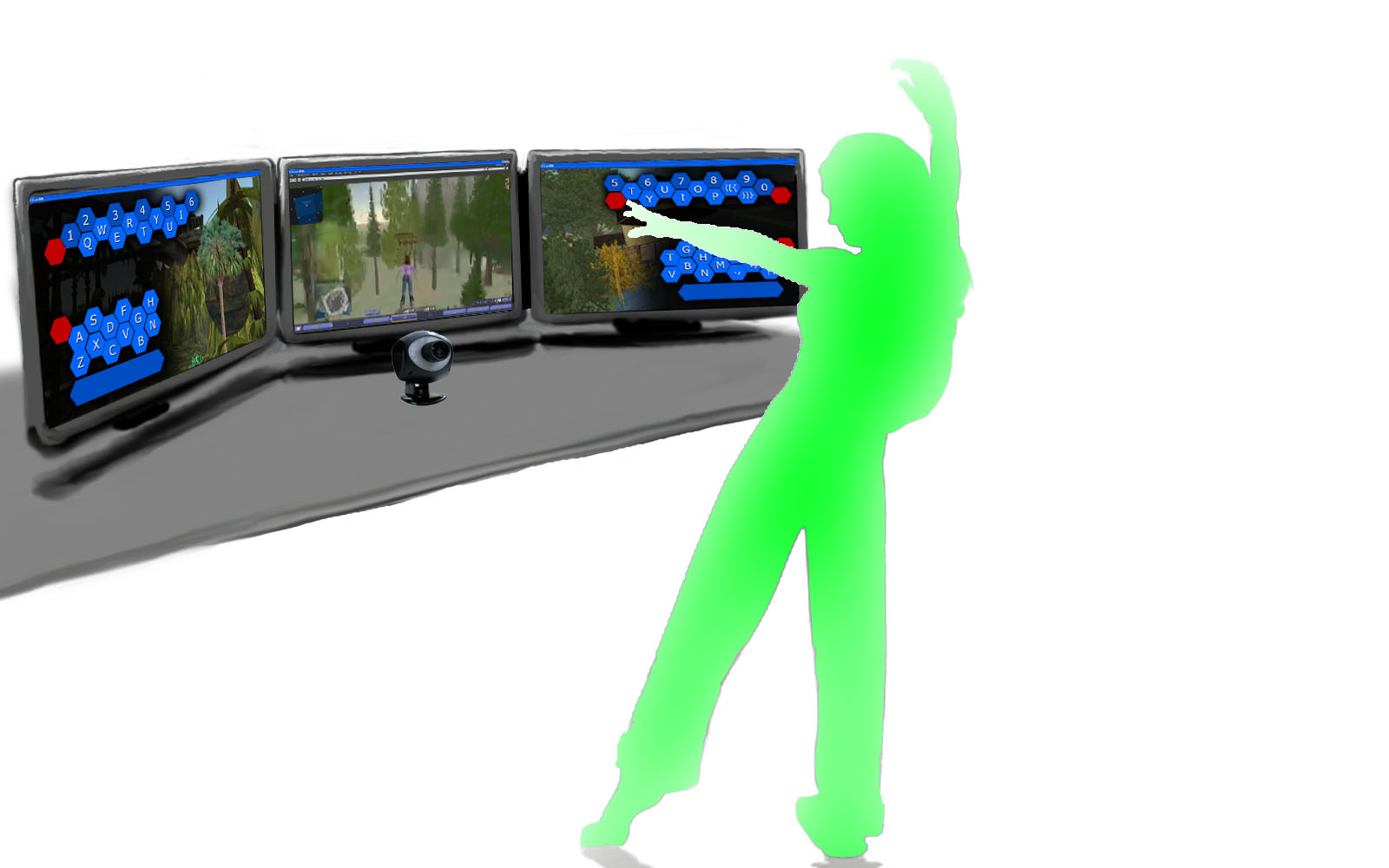 (this design assumed that it would be possible to manually gesture with two hands to type on the respective keyboards you see in overlap on the left and right monitors, thereby ‘potentially’ eliminating the need for a keyboard)

Alas, to no avail. I got next to zero response from my usual peer group and not even acknowledgement of existence from Linden Lab. I suppose that I am someone small and insignificant, and companies don’t respond for fear of lawsuits or appearing incompetent, but sometimes it is distressing for neophyles like me to see that things move at such a glacial pace forward.

For all I care, both Linden Lab can use this article can use this article to whatever benefit, and so can IWI. Please use it and implement it. If you make money off it, send me some, I can sure use it. (moneybookers : khannea.suntzu@gmail.com. Paypal sucks.). No I won’t litigate, and no I don’t mind. Please implement it. Please mention my name as inspirational source, it would make me happy seeing some of my creativity and speculation actually made a difference.

I speak for myself to state I’d want an ambidextrous peregrine, sure, and if possible late 2010. These things have spectacular potential to change the manner in which people work, play, communicate and self-express and that is vitally important in the coming decades.