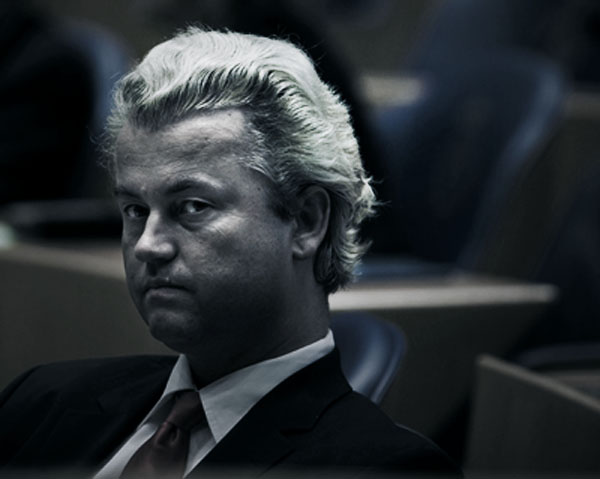 My old theory stands – Wilders was put in place as a stopgap against the populist popular vote (a fake politico) just after Fortuyn was killed. My theory is that Kok needed a solution to satiate the demand for irrational and unacceptable far right demands with the electorate – racists, confrontationalists, hysterics.

My theory states that Kok hired a loyalist from well-established trained ‘internal security’ ranks -someone pretty much a nationalist and a fanatic. Wilders fits the bill. Wilders left the VVD, an unprecedented move. His political agenda seems a contrivance.

I don’t think he is for real. His agenda is more – to get elected, and then run on either a platform of idiotic and impossible policies. He destroys votes. Or support some coalition and rant like a lunatic on the sidelines, constantly wrecking his votes, going up and down, up and down in the ratings. What he has done the last days was so destructive and impolite it staggers the imagination. It does however fit precisely with my suspicion.

What also fits, in a perverse way, is his position on the Queen becoming a cultural figurehead. Think about it – who else would be in on a ‘conspiracy’ where Wilders is an ‘insane vote neutralizer’ ? Beatrix, guraranteed – she is in on everything, And it’s clear now our next to be King Willem suffers from depressions and has quite low measurable intelligence. He is not suitable to be a King with a(ny) political influence.

Visualise Wilders not as a spokesperson for a movement – visualise Wilders as one giant false flag operation for Dutch establishment interests. The guy poisons the well.