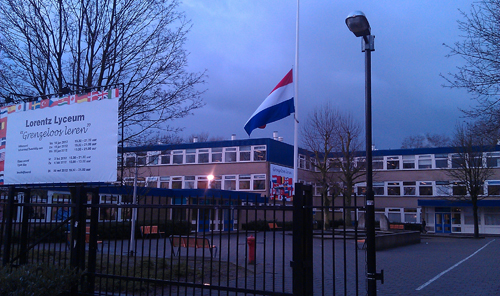 Today I had five (read F I V E) one hour presentations at the Lorentz Lyceum in Arnhem. My host was one Annemarie, who escorted me around five classroom with her colleague where I had the privilege to speak to five different entourages of students. How did this came to be? Well Nienke introduced me to the school, after Samir had to cancel his previous appointment (He’s attending an international conference elsewhere) and I was available.

The sequential pacing was fairly brutal. The teacher exhibited considerable satisfaction, and the presentations (as well as me wearing a miniskirt) was fairly well received, even while walking in the (crowded) halls. My presentation was an extension of the pirate way of thinking, in the context of rapidly advancing (and arguably disruptive) information technologies. I went pretty far in “accelerating technologies” extrapolation, but I gave the teenagers some fairly robust examples of what’s happening in the world, how dangerous all these developments are, that “essentially we are squandering democracy and personal freedom”. I got some questions of the kids, and a few were outspoken, assertive and had clear opinions. I used some solid “vernacular” to get my point across.

I even gave the kids a homework assignment – ask for their surveillance records at the AIVD. 😛