3 days ago I put my old dog to sleep. He had severe arthritis and the pain medication didn’t really work all that well anymore, and I instructed my meat server to stop mucking around, and take action. He died while we cuddled him, and the last thing the dog did in life was moan in bliss – I know my dogs pleasure spots – and then he slipped away, stopped breathing and had shifted from an animated creature with lively yet somewhat melancholy eyes into a sagging puppet with my purpose other than mulch. Let me empathically state I hate permanent death with every fiber of my being. 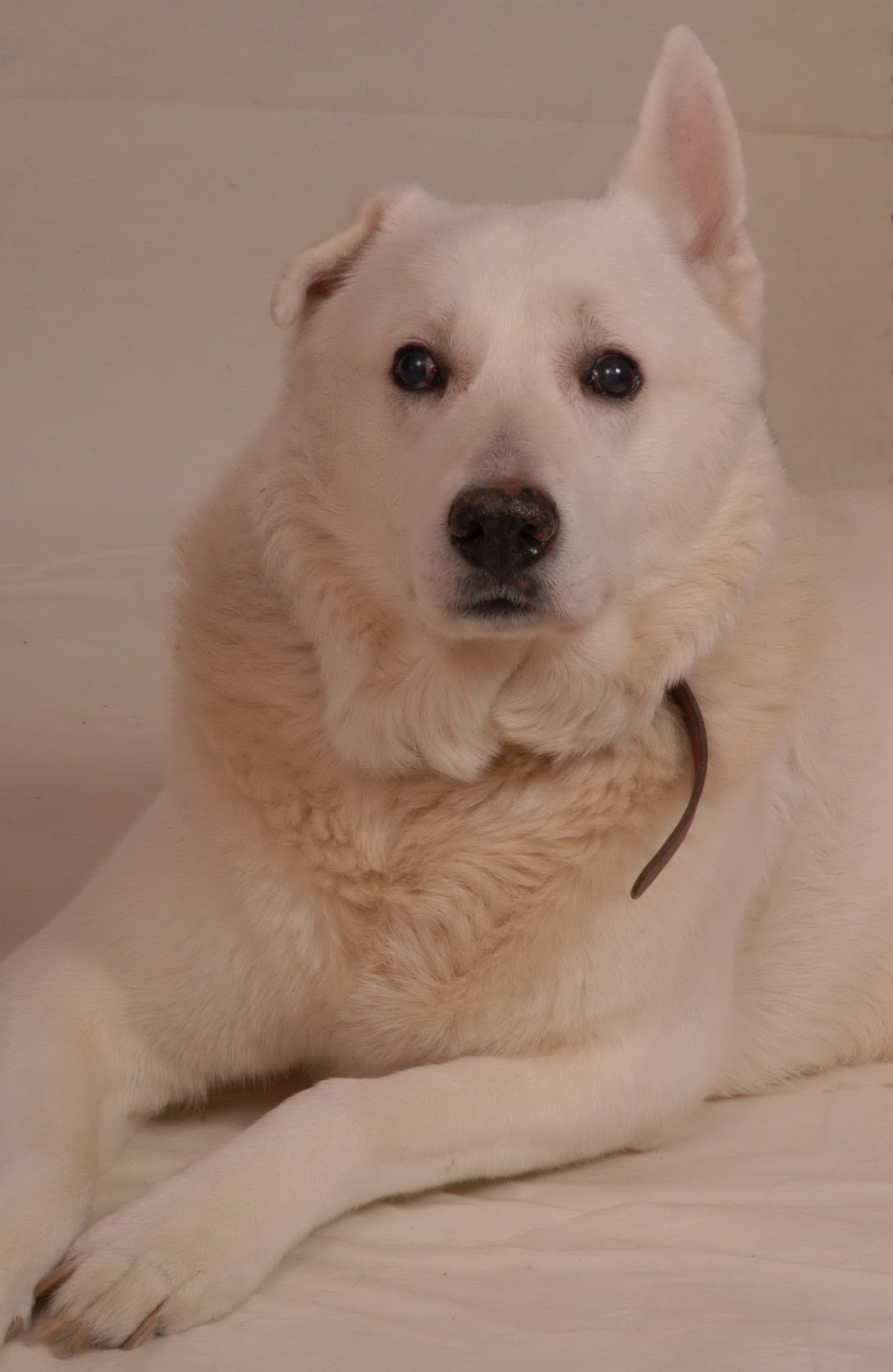 So yah I have had quite a bit of lag – my meat server zoned out on depression, so I parked the useless sack of bones on a comfortable chair and I got the hell out into VR. Gave me an opportunity to catch up on some old gaming, in effect abandoning all my duties and loved ones in other virtual realities.

I was however pleasantly surprised. Age of Conan really improved with the new launch of the ‘chinese’ expansion. The new land is amazingly rendered and it blew me away. I always had a sentimental attachment to Tortuga, but yanno Tortuga it’s a bit dated (even though its a riot as a concept). No such with the new content – graphics got better…. the steppes in AoC when traveling towards the fabulous orient are 2010 state of the art. Let me show you. 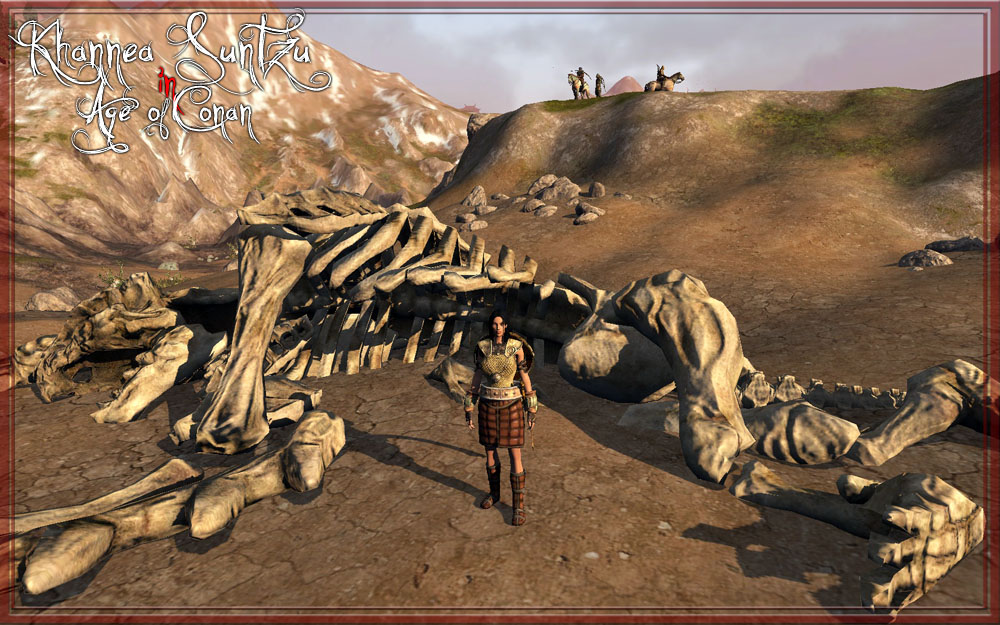 These tiny landscape elements have been well researched, perfectly situated. These are the skeletal remains of a ‘Kappa’, which is somehow significant because these days everyone runs around with a ‘Kappa’ in Age of Conan. 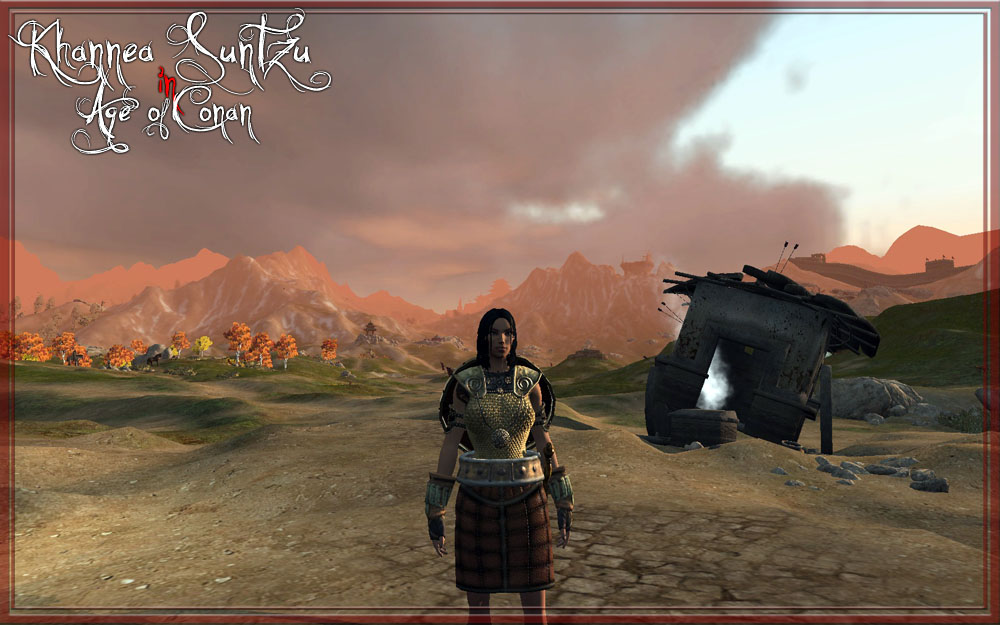 This second pic is part of the storyline – you travel from the sinister ‘nietzschean’ necromanticly inclined egypt (or ‘Stygia’) and join a caravan where you travel eastward. During the trek you encounter some animals, and finally the caravan strands in the steppes, beset by Hyrkanian raiders. Watch the archers, they are pretty lethal for their level. The land is riddled with the typical questing runaround trash, which will be impossible to sell five to ten years from now (and game designers will have to think of something new to captivate players). 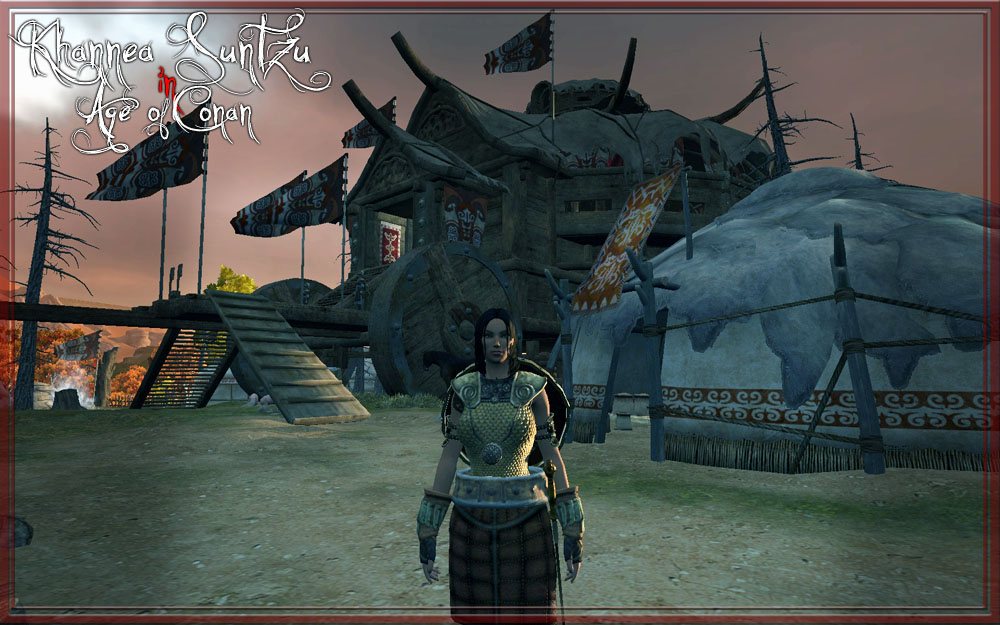 You can clearly see the design influences – In have always been a fan of Ron Cobb, and RC did some concepts for the old 1983 movie with Ahnold Schwahzenegger, with the same name. Clearly Paradox entertainment looked back at these designs and created a magnificent nomadic house on wheels, pulled along my mammoths. I was flabberghasted when I saw it, and walked into it. The textures, rendering, NPC’s, composition is all lightyears ahead of Second Life, and this annoys me immensely. 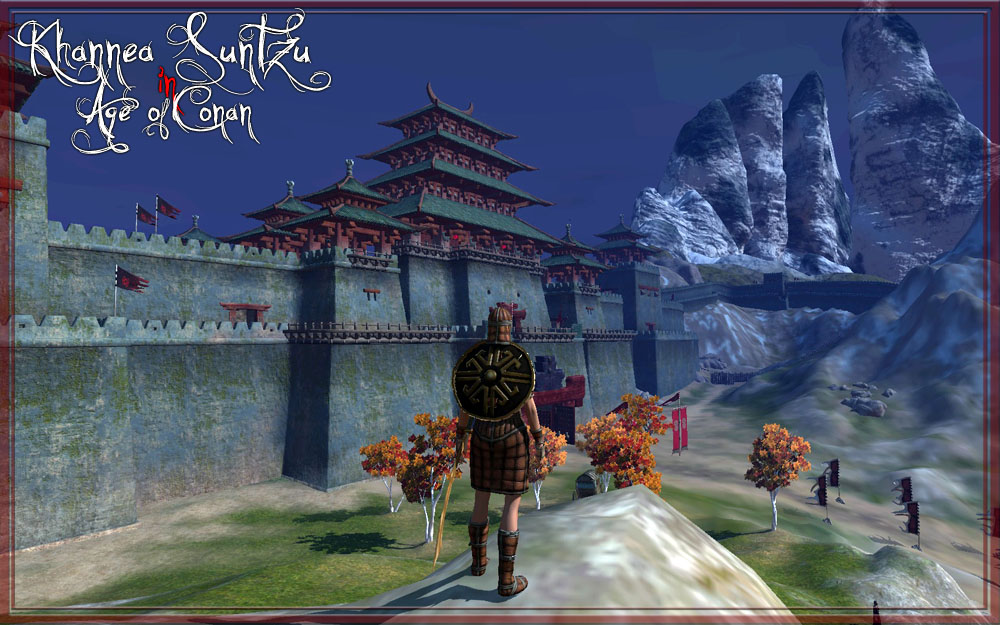 These are some panoramic stunners, yes?

Light, graphics, color, texturing, even gameplay. I like it and I heartily recommend it. I can be located on the CROM server, so look me up when you have the opportunity. I suppose AoC came with a surprise upgrade because if they hadn’t they would be finished, just as Warhammer MMO is dead in the water and bleeding money at this very moment. I love competition in this field because it forces game designers to achieve real progress. But I also conclude that Linden Lab is miles away from catching up – to this. No way they can match the appeal factor of these adventuring worlds, and yes, a big slice of their potential audience will make an educated, weighed decision and cease spending time in Second Life.

So, in a couple of months, WoW Cataclysm, while right now the Eve upgrade is already online. Some matters in SL are winding down, since my boss may have to close the Transvision sim, understandably – 300$ a month to run a sim is ludicrous; Something like 50$ would make a lot more sense. Anything over a 100$ is just not market conform; Linden Lab bleeds potential customers and revenues to any potential competition for time and play.

I have ideas on this but like I said before, Linden Lab is swamped in ideas and for some reason lacking in assets. My first suggestion would be – find a way to make sims bigger. Find a way to have clients pre-render landscapes around island sims, as opposed to the current panoramic sea vista. Offer a free library of sculpted and baked texture landscaping elements, such as rocks, gnarly root trees, postboxes, parked cars, roman temples – whatever – and make these assets download faster (or install locally). And make these elements 1 prim each – because they are standard why would they signify more allocation space? Make these elements available for free, or only to sim-owners, or only to a very low price. A library of 3D image elements worth 10 gigabyte would make land management in SL a lot more appealing. Standardization may be boring, but it would set a quality precedent – builders would start making better content if they had to build at about the same level of detail as the standard wall/window elements you can just pop into place.

Yes you can make SL a corporate fest in this manner, or have gamers flock to SL, or whatever audience you care to pull in. It has to look far better and QUICKLY.

The facts of the matter is – this industry is becoming better and better every year and moving closer to the end goal of totally immersive synthetic reality. At this rate we’ll have the visual elements covered in less than ten years… and animation and interactivity in another five. That will have some pretty deep implications.