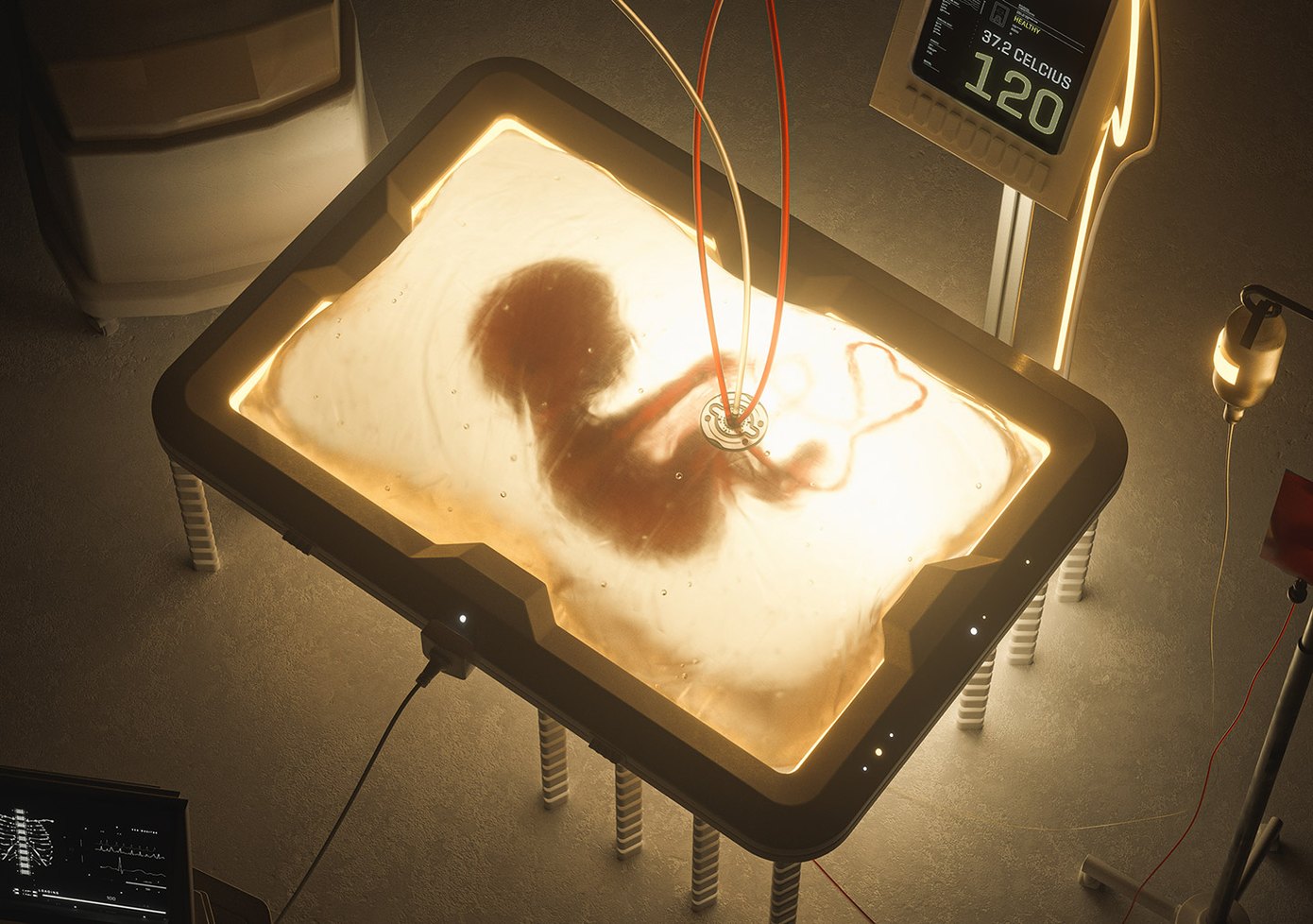 A Womb with a View

Bio bags, robotic preemies, artificial wombs, and the coming revolution in postnatal care to save babies born too soon.

When Ellen Delaney unexpectedly got pregnant with her daughter at age 41, it was a happy surprise. So many of her friends had faced emotionally taxing fertility treatments to get pregnant in their 40s, and for her it just happened serendipitously one night after a few glasses of wine. She continued to work throughout her pregnancy as an ICU nurse in a San Francisco hospital, until one night driving home across the Golden Gate Bridge, her car was rear-ended. Shaken from the accident, she took a few days off to recover when one morning she woke up to a worrying surprise: intense cramping.

Her baby was not due for another seven weeks, so she called her doctor, who promptly told her to check in to the hospital where she was put on strict bed rest for the duration of her pregnancy. Then five days later, another surprise: Her water broke, and she had an emergency C-section after which her newborn daughter, weighing just over five pounds, was promptly transferred to an incubator. Her daughter stayed in the neonatal intensive care unit for another three weeks where she had help breathing and feeding until she was strong enough to go home. “It was harrowing,” Delaney said of the NICU in a recent interview. “But we also saw a lot smaller babies in those incubators.”

Delaney’s doctors never pinpointed exactly why her now-healthy eight-year-old daughter arrived early. Some said it may have been the stress of the car accident or working on her feet as a nurse. Others have linked it to being an older mother. Whatever the reason, her birth story is part of a growing number of babies across the globe born a month or more prematurely, before 37 weeks of gestation.

The United States fares poorly in terms of preterm birth and has one of the highest rates compared to other industrialized countries. And what’s scarier is that no one really knows the exact answer to why. The hypotheses for the causes of the U.S. problem are myriad, from more women having children at an older age, to fertility treatments that lead to an increase in multiple births, to poverty and poor access to health care. Premature birth in the United States is also marked by racial inequality, with Black and Hispanic mothers in the United States having the highest rates of premature births—largely due to issues of poverty and lack of access to care.

Now, with the help of reproductive medicine and technology, the survival rate of premature babies (“preemies”) is improving. Yet, babies born “extremely premature,” which is earlier than 28 weeks, often struggle in incubators with underdeveloped lungs because air is forced into them through plastic tubes. Prematurity also affects brain development. Critical brain wiring development occurs between 37 and 40 weeks, and current incubators can’t imitate that in utero atmosphere adequately for that stage of development. Remaining in the womb beyond the extremely premature threshold of 28 weeks dramatically lowers the chances of severe, lifelong disability and death.

Artificial wombs are the future of incubators

Improving outcomes for premature babies is a cornerstone World Health Organization Millennium Development Goal, and helping save babies’ lives in extreme cases is the incentive to a number of teams of scientists around the world for improving incubators, or what they are now calling “artificial wombs,” to better support preemies born at 28 weeks or before, and even as early as 21 weeks. 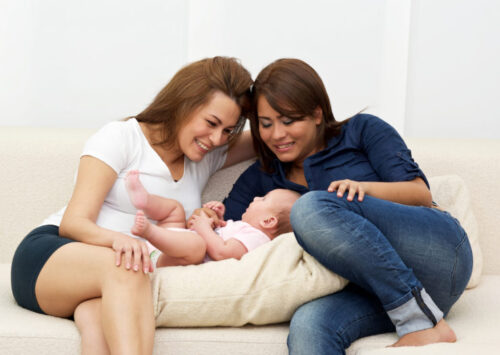 While this concept has been around since the 1950s, and scientists in Sweden, Japan, and Canada have all made attempts at models, no one to date has achieved total ectogenesis. It mostly exists in the imagination of science fiction writers and feminist bioethicists who argue that outsourcing pregnancies could improve gender equality since pregnancy is still viewed by many as a disability, and often can be when a new mother gets sick and can’t work, or has to go on bed rest to protect her growing child.  More recently, total ectogenesis has also been considered as a way for two gay men or a transgender woman to have a baby without a surrogate, an industry known for female exploitation.

“We want to take the lung out of the equation.”

Current artificial womb technology is nowhere near the place it would need to be to accept a fertilized egg and sustain it for an entire pregnancy. The closest scientists have come was described most recently in a March 2021 paper published in the journal Nature. A team of scientists at the Weizmann Institute of Science in Israel led by Jacob Hanna took five-day old embryos from mice uteruses and grew them for six more days in artificial wombs. The wombs were made from glass through which the embryos were supported with a ventilation system and nutrient fluid. A large scientific leap is still needed, however, to get to full gestation, and the Israeli approach has not been tested on human embryos.

Other artificial womb scientists are focused on devices to support preemies born as early as 21 weeks, and there are three teams who are advancing the technology around the world. In the United States, a team led by Alan W. Flake at the Center for Fetal Research at Children’s Hospital of Philadelphia has invented a “bio bag,” which has been tested on fetal lambs. The bio bag can mimic prenatal fluid to help give newborns extra weeks for their lungs to develop. 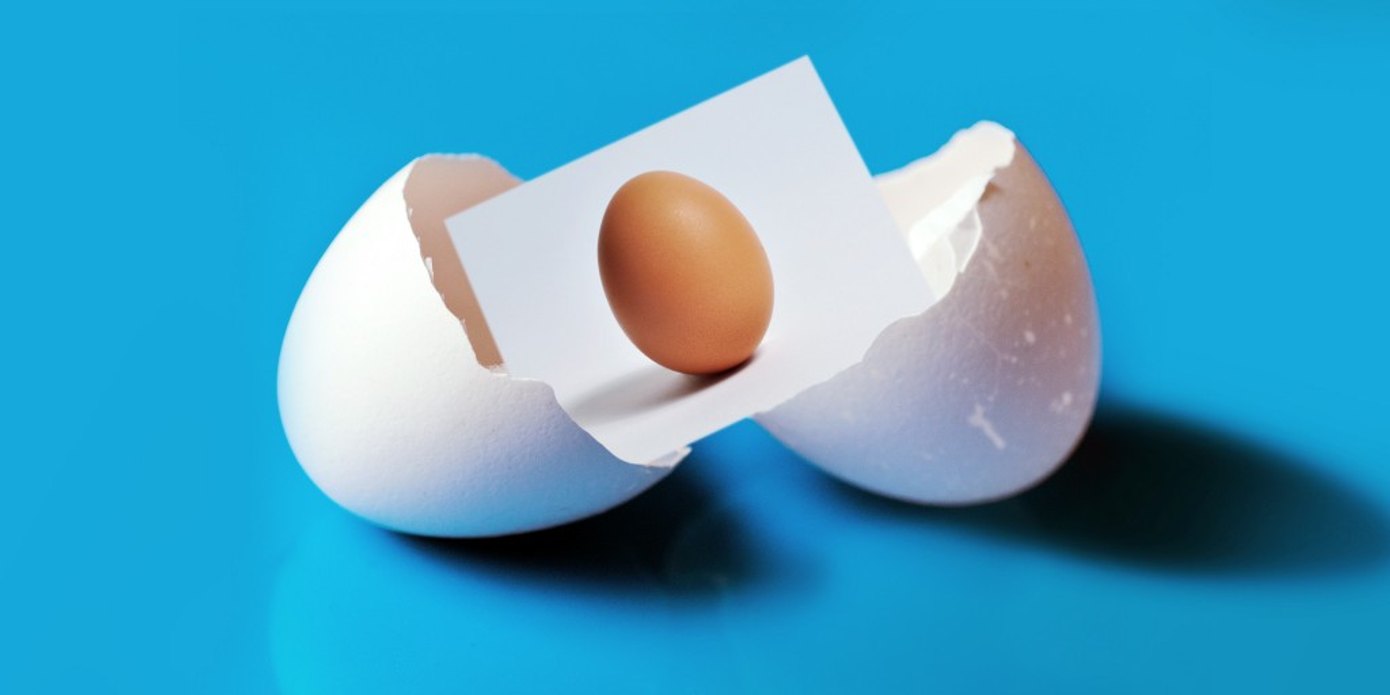 Two other projects are currently pushing the technology even further. Matthew Kemp, a perinatologist who formed a joint lab between the University of Western Australia in Perth and Tohoku University Hospital in Sendai, Japan, is becoming internationally known for the prenatal equivalent of breaking the 4-minute mile. His team’s study, published in the American Journal of Obstetrics and Gynecology in 2019, demonstrated the ability of a womb with an artificial placenta to support a premature lamb fetus that was equivalent to a human fetus at 24 weeks of gestation.

Kemp and his team are now focused on extremely early preterm lamb babies, which are the equivalent of 21- to 23-and-a-half-week old human fetuses. The big technological step in this next phase of research is to provide the lambs with life support that doesn’t require gas exchange through their lungs. “The fundamental difference between what we’ve done and what we’re working on is that we want to take the lung out of the equation,” Kemp says. “Our technology would provide a bridge that would get them to the point where they’re strong enough and developed enough to breathe on their own or in a current state-of-the-art incubator.”

Rather than having the gas exchange performed by the lung, he’s working on attaching  catheters directly into the umbilical cord arteries that would create an exchange of oxygen and carbon dioxide, powered by the fetal heart. “With this particular technology, there’s a hard stop probably at 19 or 20 weeks,” Kemp says. “It’s simply not going to be possible to get a sufficiently large catheter into the umbilical cord. If you try to put it in a smaller catheter, then the resistance will be too much for the fetal heart and it will shut down.”

There is also the challenge that lambs are very different from human babies, which is why the latest work of researchers at Eindhoven University of Technology in the Netherlands is so promising. The group, led by Guid Oei, an expert in fetal monitoring, and Frans van de Vosse, an expert in biomechanics, recently secured a €2.9 million grant ($3.5 million) to create a new womb that takes animals out of the equation. They are replacing them with a 3D-printed robotic preemie that simulates a 24-week human baby.

“If this mannequin survives, then we know that we are ready for the first human.”

The robotic mannequin can show measurable life signs, beating out a fake heart rate, reading a simulated blood pressure, breathing artificially, and changing colors if its blood oxygenation is changing. The womb itself, which hangs on a rope and pulley system,  looks more like a real uterus than the bio bag, which lies flat on a table. It also provides artificial respiration, simulates a mother’s heartbeat, and has the ability to expand like a real uterus as the baby grows. “When you use simulation models, you can come very close to the reality of a human baby more than when you use fetal sheep, which are much bigger,” Vosse says.

The team is also creating a fluid circuit that can successfully serve as a placenta and work alongside an amniotic sac. The idea is to have blood that is coming from the baby through the umbilical cord, to oxygenate in a placenta. “If you can profuse the umbilical cord, even if the baby’s outside the mother, then you can keep the lungs underwater, and the lungs can develop further,” Vosse says. “If this mannequin survives, then we know that we are ready for the first human.” The scientists think testing on humans is about five years away.

When future artificial wombs are available for clinical use, there will be the issue of who will get to use them. While addressing preterm births is a major focus of WHO, much of that focus is on preventing preterm births through low-cost interventions like linking mothers to midwives and routine prenatal and postnatal care. But for babies born prematurely in lower-income areas, where the majority of preterm births occur, are cutting-edge technologies a viable answer? More than a third of the hospitals and clinics in low- and middle-income countries don’t even have running water, let alone the reliable electricity required to maintain a fancy incubator.

So as with many early technologies, there is the question of whether equitable and low-cost transfer and distribution of this complex equipment will become feasible. Oei and Vosse agree that this is a critical aspect of future use, but they are currently most focused on getting the technology to a point where it’s proven to work on human babies—and worrying about how it will be implemented after that.

The current focus on human fetal monitoring, creating an artificial placenta, and a support system for the earliest preemies, also inevitably leads one to wonder whether this technology will eventually lead to the science fiction idea of total ectogenesis. Technically speaking, a truly artificial womb that could support growing an embryo created from in vitro fertilization (IVF) to a full-term baby would need to replicate all the placenta’s functions, not just the womb’s fluids, as well many other essential biochemical processes that go into the making of human life—many of which are still a mystery. The team in Israel reported in a recent interview in the New York Times that the next hurdle for their artificial womb might be to create an artificial blood supply that connects to the embryo’s placenta.

All the scientists interviewed for this article who are currently working on artificial wombs to support preemies agree that the data and technology for total ectogenesis is still at least decades away. With this latest news from Israel, however, it’s interesting to consider how future global collaborations between all the experts may move us closer to an imagined future. There’s no doubt that outsourcing pregnancy could help women who were born without a uterus or lost it to cancer, take away the idea of pregnancy as a marginalizing “disability,” and open it up to gay and transgender people. “I think the end stage of the device would more or less look like ours,” Vosse says.
“And to say that it is never possible—I don’t know, maybe it is? That’s not to say that won’t change in twenty years,” adds Kemp.