A new way to look at Democracy

A while ago I was in a club where I talked with the owner. Let’s call him DD. DD was active in politics during the great war and he was brainstorming in the cigar room of the establishment, his then mistress Kitty always hovering nearby. It was my idea and DD has on several occasions acknowledged as such, even though it then became the normal electoral process in ‘those circles’.
During that war there was a great pressure to find consensus. Millions of people were forced to move under the ruthless onslaught of The Enemy, and people were forced to cooperate that before had held one another in considerable contempt. If DD had not implemented this electoral system I might conclude in retrospect the War would have been lost. This electoral method allowed very fast compromise and consensus building.

I present you this message to ask you to help me. I think in this year (2011, 2012?) we face extraordinary challenges and we need a democratic mechanism that is both capable of getting the right people in positions of leadership, but still allows the electorate to feel confident that they get what they vote for. Even better, this system should be brutally honest and all parties in this system should be less able to ‘blame other people for their misfortune’.

It is my intent to run a viral experiment, first in Second Life, then elsewhere, to see if this system works. I would ask you to help me conduct this experiment and test the underlying mechanism in this electoral process. You are also encouraged to try and sabotage the attempt or (ofcourse) criticize it, ignore it or attack it from the outside. I hope to run this experiment as a breakage test.

Soon I will start up a group called Khannea Academy in SL that works to implement these experiments (joining it will cost just 1L$ to help me pay for some expenses) and that group will focus on this experiment, as well as several other projects in a similar line of reasoning.

So what is it?
Let’s call the system Khanneite Democracy. It works like this:

1. First there is a tally who gets to vote in en election. In Second Life this would be simple – one avatar is one vote (accepting alts as fair voters). The lower ranked voter is (in this stage) referred to as an ‘alpha’. Any voter, anywhere in the system can vote for anyone also recognized as a voter.
2. Those alpha who receive per voting ‘tier’ two or more votes from respective alpha’s are then elevated to beta’s.
3. A vote is cast a maximum of once per week. Votes are counted real-time, or as close to real-time as possible. A vote is also called an ‘electoral subscription’ and should be regarded as a blind or anonymous vote. After a week any voter can recast their respective vote in favor of another. 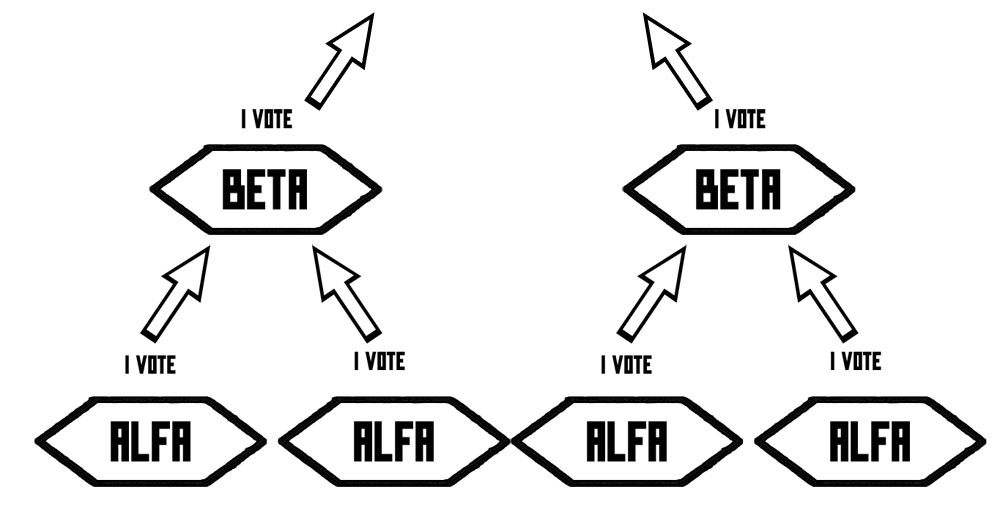 4- Any tier above alpha continues to eliminate in successive rounds of upward voting, and at some point this process ends in a set of very high tiers (somewhere before sigma) where if there are a million voters or less (as would be the probably case in Second Life) this would result in increasingly smaller tiers of elected representatives. The resulting chosen are not necessarily career politicians – they might not even be competent. But in effect they do represent the people in a manner that is as authoritative as the numbers of voters that seek representation. If in Second Life tens of thousands of people would see representation, the resulting tally would carry a representational weight and Linden Lab would be hard pressed to acknowledge this as a union (worst case) or effectively as an elected representation (best case). Even better – if this were implemented in any democracy right now and an appreciable percentage of people would take part, the election would make established politicians very nervous, as well as be compelling to those not initially taking part to do take part a bit later on, ‘just to make sure’ their voice would be heard.

In this system all acknowledged voters have a fair say in who gets to lead society, and you at least have a fair chance to get someone accountable, trusted, charismatic, credible, sane and competent. Why vote for an idiot, and if so, why would people vote for anyone not that trustworthy for tier after tier.

The subscription based real time system also makes those chosen act more cautious. My first idea is to make highest chosen receive their position for 6 months (or a bit less – say 10 million seconds, which is almost 3+ months) after they end up with a decisive vote tally. Once the elected loses support the elected will be replaced after a set period (6 months, but this might also be shorter or longer – we’d have to vote on that) that exists upon the end of the governing period. I do not think I can make statements on what periods should be prudent, but a personal preference of mine would to not think in days, weeks, months – but in large amounts of seconds, as to create a more precise moment of counting the transition from one leader and determining the next. It may in those transitional periods be prudent to close the option for changing the vote for a set amount of time, as to avoid voters engaging in ‘sabotaging vote swapping’ but again, such a procedure should be determined by the experimental democratic procedure itself.

This is “ongoing democracy”, and subscription/tier based elections should be very engaging and far more inspirational to the electorate. Inherent in the system is the potential to engage in organizing votes, lobbying, party politics, protest, slander, unionization, protest votes and even voter apathy. However I bet you that even the most arduent electoral cynic will be hard pressed to change her ways if she makes it several tiers and attains the respective prestige of such a station. Apparently quite a few people respect people of a relatively higher tier.

There is a strategy to this system. In any successive tier every vote over 2 votes is basicly a lost one. So voter blocks would organize to ‘hedge’ their votes. This would be a good thing, even though it would favor disciplined voters – which forces anyone else to start payiong attention too, or be pushed in to marginalisation of the electoral process.

Another important factor is this system is its voluntary character. Alpha’s can be as morose, apathic, recalcitrant, stupid or arrogant as they desire. However if they start feeling the consequences of being an electorally craven dork (by not voting, or by voting stupidly, or by voting deceitfully [breaking electoral agreements] or by voting for other dorks) they will hard pressed to reconsider and evolve a brain, quickly.

As said a fractitious, disorganized or naïve electorate may ‘waste’ votes and reduce the ratio to as low as 1:10 (every sponsored party receiving considerably more than 2 votes) bit this makes the system proceed faster.

Sponsors may lobby for votes from sponsors and make policy or value promises when sponsored.
But since each step is incremental and gradual the relegation of values and political favors proceeds filtered and effectively transparent.

I’d like to experiment with the transition at the last levels; the sponsorship of a ‘parliament’ or maybe even the choice of a ‘president’.

The Difference
Democracy as we have it does not work well enough. Political parties have become political-ideological monopolists. By changing the electoral system to (a) a non cyclical system (no formal elections) and (b) a way to choose someone you personally know and (c) a way to affect and personally be a factor for translating values and political favors into personal relational sponsorship. And to leverage votes, this system would strongly compel voters not to waste their votes and hedge their democratic power.

What I’d want to find

As many people as I can find that would like to experiment with this system and ‘test ride’ it. Work out systemic bugs. Look for strong points and weak points.

Experiment with creating “authoritative and compelling” representation that could negotiate with Linden Lab. We can easily proceed to do the same in Facebook, G+, Diaspora, World of Warcraft, Eve Online or just about anywhere else. I can imagine an entity of Facebook having a corporate heart attack if one day (soon?) an appreciable percentage of its user base organized in this manner and would come up with a list of demands.

Find people with experience in web site design, security and database management in measure with voter registration in Second to facilitate a safe, anonymous, fair, credible and authoritative electoral process.

Keep updated for changes to this page.

Update
Benefits of this idea

1 – everyone can vote,
2 -everyone is electable to convey values of those people that vote for you upwards to the leadership
3 – it deconstructs party/kartel affiliation
4 – it is extremely quick in turnover; leaders must REALLY listen to their electorate
5 – no more formal election cycles
6 – the system is far more resistant to corporate lobbying
7 – the system is very resistant to calcification
8 – the system is more transparant
9 – the system is far more democratic than existing systems
10 – the system penalized voter apathy immediately
11 – the system allows for apathetic voters to cast a vopte whenever they care and ignore the system when too busy
12 – anyone can take part in the system by direct lobbying
13 – The system favors very honest and immediate compromize and coalition
14 – Bad/impopular leaders are instantaneously removed and are unlikely to ever return
15 – This system strongly favors consensus politics
16 – This system is extremely e-voting compatible.
17 – You can link a higher tier requirement to positions of public office.
18 – the system incorporates immediate electoral sentiments; this would end pre-election polls and journalistic white noise.
19 – Voter dissatisfaction immediately translates to a loss in electoral support and vice versa.