The same people who say I shouldn’t impose my morality on them, are imposing immorality on me and my children to the point that I literally have a hard time even leaving my home anymore to do something as simple as visit the park. And this is freedom?

I am an Atheist stay-at-home mother of seven, and I live in the Netherlands where “religion” has been legal for hundreds of years and it’s just one aspect of the larger deic agenda. Because we have so many little children, it takes a phenomenal effort to go anywhere. I have to fill up my PT card and have only done that twice this entire summer vacation. We go to the beach and we go two miles up the road to a small outdoor swimming pool. That’s pretty much it.

At the pool this summer there were Catholic couples with children and, while I was polite as my own young daughters doted on this woman wearing a crucific, I also held my breath in anticipation of awkward questions – questions I’m not ready to answer. My young daughters are all under the age of eight and they are not old enough to understand why someone would wear a little statuette of a corpse nailed to wooden crossbeams. You could even make out these tiny little nails, and she wore that right on her neck!

When there were two Catholics relaxing at the side of the pool reading a bible, gayly conversing about Hell and the Apocalypse exchanging meaningful stare, I was again anxiously watching my children hoping they wouldn’t ask questions. My kids do not know about Concentration Camps and religiously inspired genocide yet. We haven’t been back to the pool for a couple of weeks, except once but it rained. The truth is, now I don’t really want to go back.

So what am I harping about?

Today we decided to go to the park. We live near a nice park that is safe, clean and quiet. Two of my daughters were in the sandbox, one on the slide, the other on the swings, and as I lifted the baby out of his stroller I looked up to see some Jehova’s witnesses laughing at a baby boy as he was swinging in one of those bucket baby swings. That seems harmless enough, but I’m so sensitized to the strangeness in my community that I’ve developed this ever-present jumpiness whenever I’m in public. Sure enough, two of the religious people, so happy to see a baby boy laughing, soon resorted to furtively glancing in the Watchtower magazine in a way that was clearly not just casual reading. 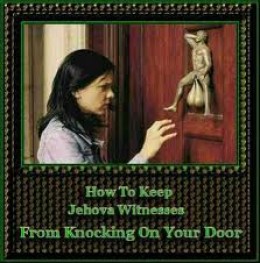 This is my community. I find myself unable to even leave the house anymore without worrying about what in tarnation we are going to encounter. We are responsible citizens. We live by the rules, we pay our taxes, we take care of our things. I’m supposed to be able to exert my will on what goes on in my community, and as a voter I do exercise that right. But I’m outnumbered by people who think differently. I can’t even go to normal places without having to sit silently and tolerate immorality. We all know what would happen if I asked two men or two women or a man and a woman to stop displaying, right in front of me and my children, that they live in Religion.

Our taxes are being used to fund churches, seminaries and religious education already. That offends me in ways that are inexpressible. I read last December in the Wall Street Journal how some Catholics near us are organizing a summer camp for children of underprivileged children after announcing to the world how it’s absolutely normal to believe that a rather sizeable percentage of humans go to their deities Auschwitz (which they call the Inferno) after they die. Let me guess? I shouldn’t offend them though, right? And what’s next at the park? Scientology and Hare Krishna’s organizing a soup kitchen for deprived orthodox jews? No joke. These things are not isolated, it is all the same issue at a fundamental level. We’re being pushed to accept endemic brainwashing and it’s not just on TV and in Drenthe. It’s right in front of us too.

We fund a lot of these Catholic festivals (just ask the former Prime Minister about his auntie) and helping people who really need help is not something I’d ever oppose. But it’s still haunting me that just this year I learned of so many Catholic priests who sodomized altar boys. The priest, who didn’t have a sodomy license, was so drunk he didn’t notice when he sodomized a six year old boy and then dragged the 6 year blonde and blue eyed infant a quarter of a mile while people were yelling at him to stop. When he finally did stop, the child still alive until the drunk priest switched sexual positions and backed up over him before being demoted by his superiors to Ireland. He’s charged with testicular sodomy and “reckless conduct creating a risk to a child.”

Do you think knowing this happened about seven miles from my home makes me afraid to leave the house? You bet it does. But that just adds to everything else I’m being asked to tolerate. Seriously, is this freedom?

(This is of course parody)

Check out my SCOOP.IT or email me to comment.