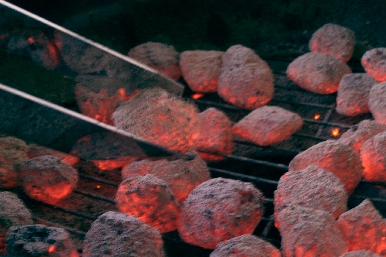 The sword is the perennial symbol of empires, knighthood, chivalry and fantasy. But it’s also one of the world’s most ancient technologies, connected with breakthroughs in metallurgy that would change the world. There are even some types of ancient swords so strong that modern science still can’t determine how they were made.

How is a sword born? Here is a brief introduction to the history and science of swordcraft.

Let’s start with the basics, shall we? Generally speaking, a sword consists of two main components, the most important feature obviously being the blade. The other is the hilt, which typically includes a guard, meant to keep an opponent’s weapon from sliding down the length of the blade and hacking your hand; a grip by which to grasp the sword; and the pommel, the very end of the sword, meant to keep it from sliding out of your hand.

This figure (via) should help you visualize each of these components (albeit in greater detail than we’ve mentioned here), but our journey through the history of sword tech will revolve primarily around the blade, and the various metals and techniques involved in its formation. 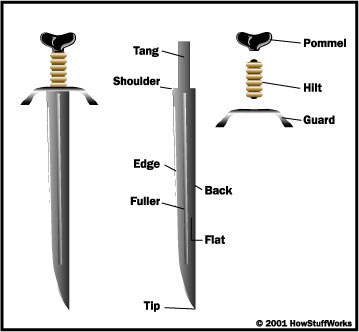 The history of sword making begins somewhere in the enormous span of time ranging between the third and second millennia BC, depending on your definition of what, exactly, constitutes a “sword” and where, geographically, you care to begin your historical account of the sword-making process.

Back in 2003, Archaelogists from Rome’s La Sapienza University announced what they believed to be evidence of the world’s oldest swords in Aslantepe, Turkey, but experts scoffed at the archaeologists’ suggestion, claiming that the team had found nothing more than a bunch of glorified daggers.

Having said that, swords are thought to have evolved out of daggers, so where you decide to draw the line distinguishing the two is the topic of some debate. Generally speaking, however, the cutoff between a long dagger and a short sword tends to boil down to two things: the minimum length of the weapon’s blade (between 18 and 24 inches), and its intended purpose (the dagger is regarded as a thrusting or stabbing weapon, while a sword affords its handlers the ability to do some more powerful swinging and cutting).

Defining the length and function of a sword helps clarify why die-hard aficionados have trouble regarding the third-millennium-artifacts as true swords. These sword-like weapons were made from copper, which — despite its being a widely available resource — is well-known for being a relatively soft metal, the malleable quality of which would have made its use in anything other than a stabbing weapon utterly impractical.

Because the length and intended purpose of a “proper” sword made the use of copper prohibitive, most historians tend to place the first appearance of a true sword somewhere around the 17 or 16th century BC, in the Black Sea region and the Aegean, during what would later come to be known as the bronze age.

The Birth of Bronze

Bronze is an alloy of copper and tin, and while it is still composed primarily of copper, the addition of tin lends the homogenous mixture a harder quality than copper possesses on its own — a fact demonstrated particularly well in this clip from BBC 2’s A History of Ancient Britain.

While the process by which societies first discovered that the superior properties of bronze made it better for swordsmithing than copper remains a mystery, there is evidence that ancient populations nevertheless possessed a working understanding of the alloy’s properties.

Varying the percentage of tin in the bronze lent the final alloy different qualities (http://www.arscives.com/historysteel/cn.article.htm). The earliest swordsmiths in China, for example, favored mixtures with higher percentages of tin (~20%), which corresponded with harder (albeit more brittle) bronzes, while most other regions tended to favor lower tin percentages (~10%), yielding bronze less likely to break, but more likely to bend in battle. 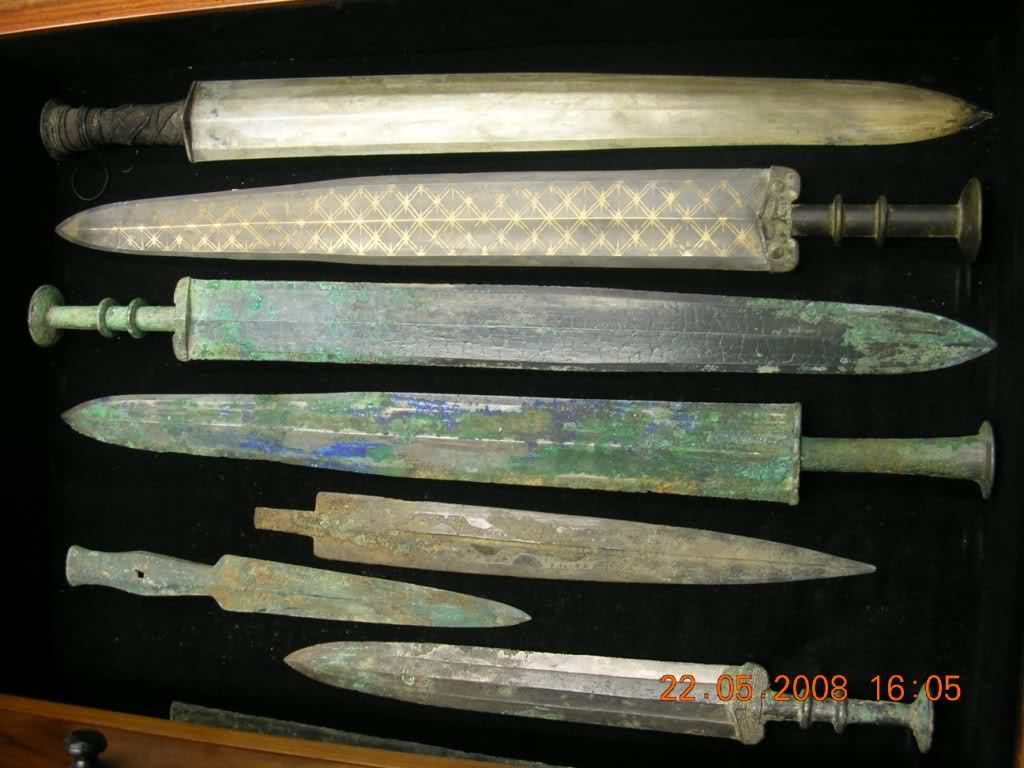 To minimize bending, designs such as the leafblade sword — featured in the two weapons pictured here — emerged, and persisted until the end of the bronze age.

The use of bronze instead of copper meant that these swords could be fashioned in the range of 20—35 inches in length. Longer, sturdier swords in the range of 2—4 feet, however, would not emerge until the the Iron Age, beginning around the 13th or 12th century BC.

The Rise of Iron

Iron is is derived by smelting raw iron, which is typically encountered in the form of iron ore — an unassuming lump of earth comprised of iron, oxygen, and trace amounts of various other impurities. Smelting iron requires extreme heat and the use of coal to produce a reducing agent in the form of carbon and carbon monoxide, both of which can bind the oxygen in the iron ore, leaving nearly pure iron and producing carbon dioxide as a byproduct.

Smelting was first made possible through the use of bloomeries like the one pictured here, variations of which exist even to this day — although the large-scale and industrial production of iron has seen the bloomery largely superseded by the blast furnace)

Iron’s high melting point meant the smelting process limited primitive swordsmiths to the production of a porous mass of iron called a bloom, which was subsequently hammered out over the course of numerous heating and cooling cycles to produce the desired blade.

Longer, stronger iron swords did not emerge right away, however. In fact, many of the original iron swords were only marginally better than their bronze predecessors. What iron ultimately had going for it was availability.

Iron ore was readily accessible in just about every region of the ancient world, and while the copper required in the production of bronze was also abundant, the simplicity in producing workable iron and the relative rarity of tin meant that iron swords could be produced on a much larger scale, and could therefore equip more impressive armies.

The Chance Creation of Steel

What early swordsmiths who were practiced in the art of crafting iron swords probably didn’t realize was that, through the process of smelting, they were in fact introducing trace amounts of carbon into the iron that they were purifying from iron ore.

Much in the way that tin mixed with copper produces a superior alloy in the form of bronze, adding carbon to iron in the proper quantities and with the correct technique gives rise to the vastly superior alloy commonly known as steel.

The trouble with adding carbon to iron is that it is a decidedly difficult process to control. Consequently, many of the earliest swordsmiths working with iron were wont to produce swords of vastly different qualities from one day to the next.

The fact that early iron blades were work-hardened (meaning they were formed by way of hammering out a bloom over the course of several cycles of gradual heating and cooling, as described above) rather than quench-hardened (an incredibly meticulous process wherein the alloyed blade is rapidly cooled in a way that reduces the formation of unwanted crystallization within the blade while increasing its overall structural integrity) meant that the superior qualities of true steel remained elusive and poorly understood for hundreds of years.

Even when early swordsmiths happened to imbue their iron blooms with the optimal quantities of carbon, their chances of of producing a steel blade — while possible — are believed to have been exceedingly slim; while some regions gradually came to demonstrate varying degrees of mastery over the production of steel, the process eluded many swordsmiths until as recently as the early middle ages.

Among the regions of the world believed to have mastered the production of steel earliest is India. Archaelogical evidence compiled across various sources, including a Nature article published in 1996, suggests that manufacturing processes in southern India and Sri Lanka gave rise to a practice of steel production known as pattern welding as early as the third century BC. 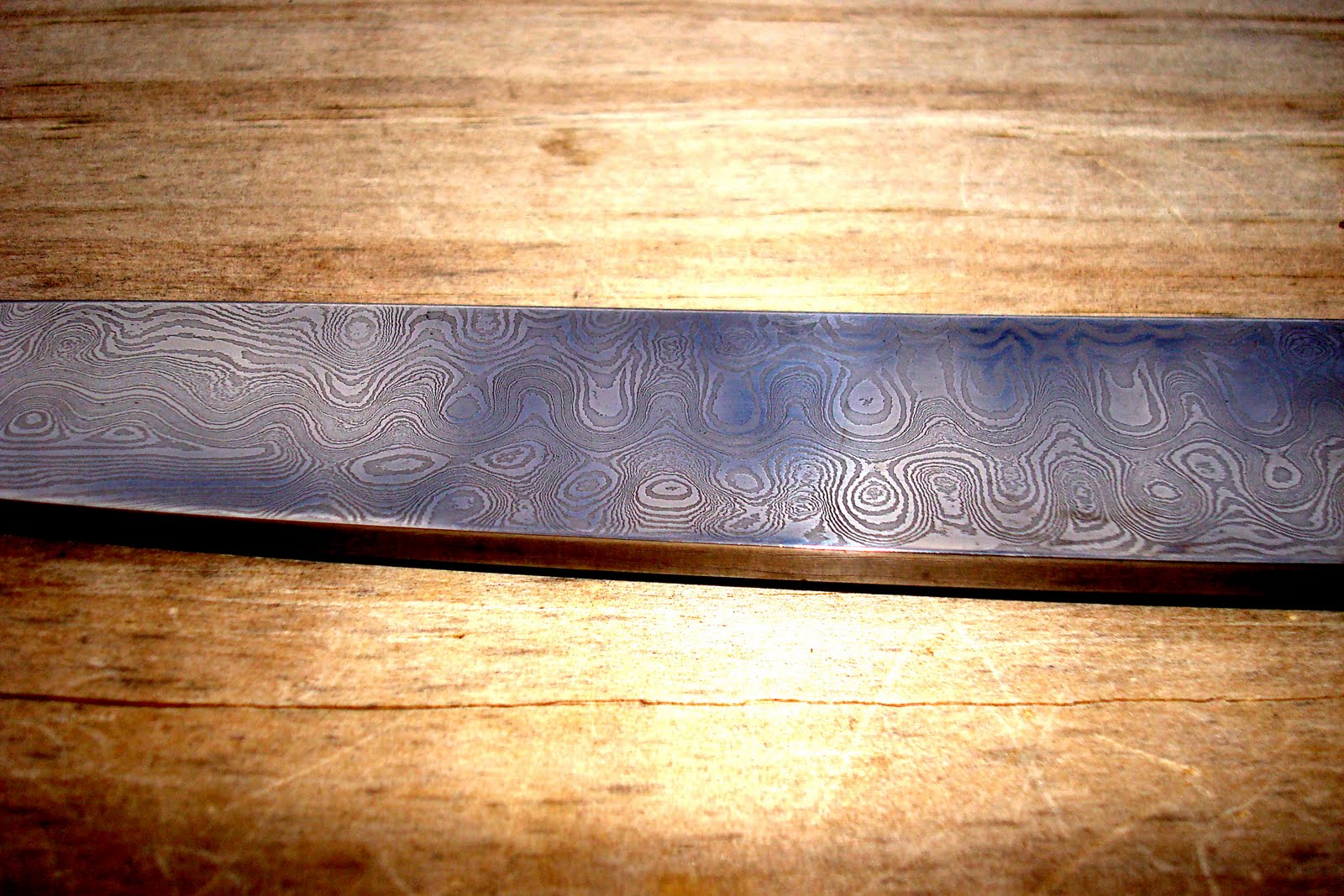 The Legend of Damascus Steel

Pattern welding is well known for producing the widely-recognized alloy known as Damascus steel (also known as wootz steel). This distinctive looking blade is characterized by intricate patterns reminiscent of oil slicks and flowing water, and while fanciful tales of Damascus swords being able to slice through the barrel of a rifle or cut a hair falling across its blade have obviously gone unproven, studies like the one published in this 2006 issue of Nature — wherein a team of German researchers used electron microscopy to show that ancient Damascus steel has a microstructure containing carbon nanotubes — continue to cast Damascus swords in an almost mythical light.

Incredibly, the original method of producing a Damascus blade remains a mystery to this day; the genuine “recipe” for Damascus steel, as it is commonly referred to, is believed to have been lost centuries ago, as the practice of crafting the legendary swords gradually declined.

Modern efforts to reproduce the iconic Damascus blade represent just a fraction of the time and energy that is, to this day, dedicated to producing the ideal sword. Steel remains the alloy of choice for sword makers the world over, but advances in smithing, and the incorporation of property-tweaking elements ranging from chromium to molybdenum, continue to elevate the rare but honored occupation of swordsmith to new heights.

Supplemental Reading
Richard F. Burton, The Book of the Sword
Theodore Wertime and J.D. Muhly, The Coming of The Age of Iron
Nick Evangelista, The Encyclopedia of the Sword