A recent online discussion panel revealed some valuable insights into the political aspects of increasing healthy human lifespans. Perhaps the most exciting part of the panel involves the idea that getting politicians to support longevity/aging therapeutics might not be as hard as people may think.

On December 9th, 2021, the recently launched Alliance for Longevity Initiatives (A4LI) held its first public event! A4LI is an allied, US-based 501(c)(4) nonprofit organization that aims to provide our movement with the political and lobbying voice it needs in the United States. In order to get therapies approved, we need such an organization to engage with politicians and government agencies.

Perhaps surprisingly, there is plenty of interest in increasing healthy human lifespans in political circles, and there is an ongoing effort to standardize the industry to help smooth discussions with politicians and government agencies. The Longevity Biotechnology Association was created last year with this in mind and as a way of separating the credible research happening from the snake oil salesmen that plague it.

Once considered fringe science in past decades, it is nice to see that those days are largely behind us and that the field is increasingly regarded as a legitimate area of scientific research. Hopefully, as more human trials are launched and quality science is conducted, that perception will continue to improve and attract researchers.

Their first panel included former Speaker of the House of Representatives, Newt Gingrich; former Democratic Congressman, Steve Israel; Director of the Institute for Aging Research at Albert Einstein College of Medicine, Nir Barzilai, M.D.; Partner at the SALT Fund, Dina Radenkovic M.D.; and A4LI Chair of the Board, Sonia Arrison. The panel was moderated by A4LI’s Founder and President, Dylan Livingston. 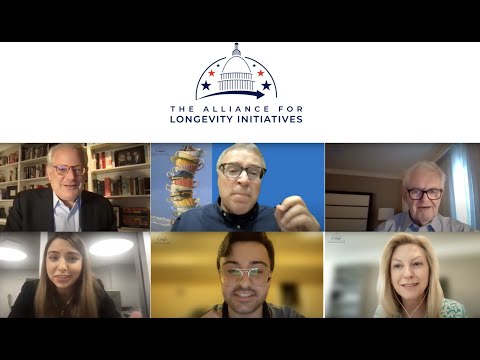 What’s next, and how can you get involved?

Dylan Livingston took a moment to answer some follow-up questions we had from the panel.

It has been suggested that academics are largely on board about doing something about aging, investors are increasingly enthusiastic, and now the target should be policymakers next. What about the emphasis on convincing the public; should this take a backseat until the politicians/agencies are on board?

Dylan – The focus can and should be on both – the community/industry can run a public persuasion campaign while policymakers are being lobbied. A4LI, because of its 501(c)(4) designation, is going to focus mainly on policymakers for right now – that’s an unexplored avenue.

What are the plans for A4LI to drive change at the Food and Drug Administration? Have you considered focusing on expanding the RMAT framework, which caters to cutting-edge medical technologies?

Dylan – Creating a designation pathway for longevity/aging therapeutics, similar to RMAT, is our goal but not what we are pushing to achieve in the short-term.

In the past, some people in our community have contacted politicians about life extension but lacked a clear plan of action, which has harmed our image as a movement. What can someone who already supports the movement do right now to support political progress?

The community appears to agree that an effective political voice is needed for our field. This became evident when A4LI recently raised over $12,000 during the Gitcoin GR12 funding round to help with its lobbying and political efforts.

We spoke to A4LI board member Keith Comito about the launch of the new non-profit life extension lobbying organization.

I am incredibly excited to see the launch of the Alliance for Longevity Initiatives, first announced at the Lifespan.io EARD2021 conference, and to sit on the board of the A4LI myself. If we seriously desire to accelerate the pace of life extension research it is important that we collectively understand the related policy landscape, listen to those who live within it, and learn the ideals means by which positive change can be accomplished. At this event I was overjoyed to hear former Speaker Newt Gingrich and former Representative Steve Israel express a clear and bipartisan sentiment — that it may be easier than once thought to see significant funding applied to addressing the core mechanisms of aging, providing we chose our words with the care such an important mission deserves.

Keith is also the President of Lifespan.io, and on a related note, we are fiscally sponsoring A4LI’s educational resource-related initiatives and you can support this organization with a donation if you would like to help out. You can also contact us if you want to send a wire transfer to support the Alliance for Longevity Initiatives.

As surprising as it might seem, as this panel shows, it may not be as hard as expected to get politicians on board. What it will need is careful planning, effective communication of the facts, and thoughtful dialogue between researchers, lobbyists, and politicians. This is where the A4LI comes in, and it could, at long last, give our movement a much-needed political voice.